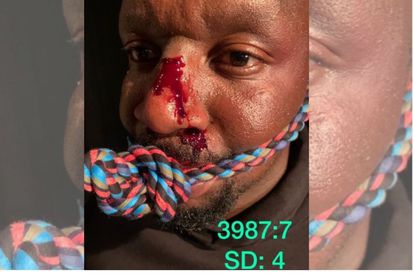 Tenda’s wife – Mpho was told she is going to be a widow. Will Tenda exit ‘Muvhango’? Image via Instagram @muvhangosa

Tenda’s wife – Mpho was told she is going to be a widow. Will Tenda exit ‘Muvhango’? Image via Instagram @muvhangosa

Muvhango fans were shocked last night (18 January) when Tenda’s wife – Mpho was informed by the ancestors that she is going to be a widow.

Tenda is being held kept captive by the Angel of Justice (Tshireletso and James Motsamai) who want him dead.

IS THIS THE END OF TENDA?

#Muvhango is worried that their fan-favourite character Tenda will likely get killed this season after Mpho consulted the ancestors and was told that she is going to be a widow.

Tenda was kidnapped by the Angel of Justice who are recording and sharing his kidnapping and forcing him to admit to his crimes.

His life hangs in the balance as the Angel of Justice has called on people to vote for him to die or live.

Tenda (Nathaniel Ramabulana) has gotten away with killing people, stealing from companies, and many more.

James (Dingaan Mokebe) kidnapped Tenda because he kidnapped him first and Tshireletso (Nay Maps) is helping James because Tenda killed his brother – Hulisani.

Viewers are also disappointed that Mpho (Azwimmbavhi Rambuda) is only consulting with the ancestors now when her husband is dying.

‘MUVHANGO’ FANS REACT TO HIS STORYLINE

“I can’t believe Tenda’s Life is in my hand. I’ve got power.”

“Lemme sleep on it, I’ll decide to vote tomorrow.”

“I will always love Tenda whether innocent or guilty.”

“I knew the brother was involved in this mess. Love the collaboration.”