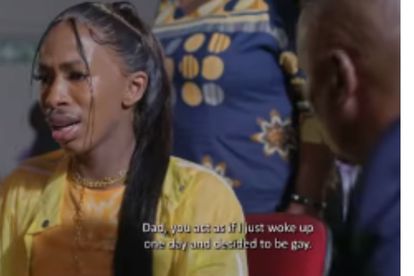 ‘I didn’t choose to be gay’: Lasizwe debuts on ‘Durban Gen’ [WATCH]. Image via Instagram @lasizwe

‘I didn’t choose to be gay’: Lasizwe debuts on ‘Durban Gen’ [WATCH]. Image via Instagram @lasizwe

YouTuber Lasizwe Dambuza took to his social media platforms to announce his debut in e.tv’s Durban Gen last night as a homosexual character.

Viewers of the medical drama applauded the star – who is popularly known for making people laugh with his comedy skits.

ALSO READ:‘If the Oscars were in SA’: Lasizwe reacts to slap in hilarious clip [watch]

The reality star who is no stranger to television as he had his reality show Lasizwe: Fake it till you make it impressed soapie viewers with his acting debut

Dambuza revealed that his role in the e.tv drama was his biggest acting debut.

He shared a snippet of his gay character two days ago (30 March) alongside his on-screen father and captioned the post:

On the show – Dambuza’s on-screen father who is a pastor is embarrassed by his gay son and the way he’s dressed.

He also insists they pray for him so they can get rid of the homosexual demon that’s inside him.

“Levels honey. I said levels. Definitely will be glued to my seat. I mean you see who’ll be on our screens.”

“We are not watching Skeem Sam.”

“Congratulations, you deserve it shame. We waiting for you babes.”

“Damnnnn omg !! Look who’s in town?? Things are about to get real.”

“You good a this. This is your thing it’s in you, you are a natural.”

“Is there anything you can’t do.”

“Seeing your growth from the days of watching your Facebook videos to moving across multiple social media platforms and becoming a household name among the youth.”

“Seeing you in this role is amazing.”

“I love it I love seeing you in any production.”

“Definitely the content we signed up for.  Congratulations Sweetie.”