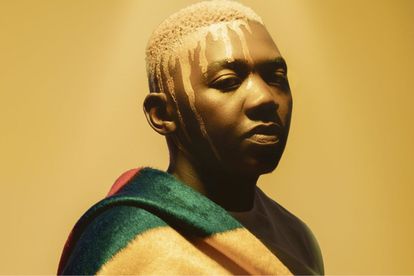 For the past two years, Aymos has been one of amapiano’s most prominent vocalists, appearing on hits such as eMcimbini by Scorpion Kings (the super duo Kabza De Small and DJ Maphorisa), and Bambelela and Shonamalanga – both collaborative efforts between Aymos and Mas Musiq.

But on his recently released debut album Yimi Lo, the musician shows off different colours.

As a featured vocalist, Aymos sings to the beats given to him. On Yimi Lo, however, the artist takes control. Listening to his debut, it is clear: Aymos understands his vocal capabilities and at times, he prefers the listener to stop dancing and pay attention to his stories.

Injecting Afro-pop, the genre in which he started, into amapiano, he refers to Yimi Lo as an “Afro-yano” project.

“I feel like most people will relate to the album. Even the more mature audience will be able to connect with amapiano songs. Amapiano is considered ama2000 [Gen-Z] music, but my album will catch a wider audience,” Aymos said a few days before the release.

The first half of Yimi Lo consists of vocal amapiano tunes in which the artist embraces his new life as a professional musician. On Lyf Styl, he declares:

While on AmaPaperBag, Aymos plays to the stereotypes of celebrity culture, name-checking high fashion brands with which he admits he’s not even that familiar.

“Once you’ve made it, everyone sets standards for you,” he says.

“Like, now that you’re trending, [the assumption is] you probably stay in Sandton, drive a BMW or a Merc [just like] the likes of Maphorisa who are at the forefront of amapiano.”

This idea is present on the album’s opener Jemeni, featuring amapiano stalwart Focalistic, in which Aymos sings the praises of German cars.

“Jemeni is a personification of German cars. Fast, heavy machines. They are beautiful and muscular. That was how I interpreted my comeback into the amapiano scene.”

This “comeback” was out of a period of disillusionment and confusion. After releasing a hit song during the initial Covid-19 lockdown in early 2020, the musician recalls his shows being cancelled one after the next. eMcimbini was one of the biggest songs of 2020, but Aymos couldn’t convert the hype into money.

“I remember I had more than 50 gigs on my calendar, and I saw them being cancelled each and every day,” Aymos told the publication Pan African Music. “I went broke … and my song was booming in the streets. It was so confusing to my family and my friends. I felt like I wanted to die.”

eMcimbini, which shamelessly touts the hedonistic amapiano lifestyle, was inspired by ama2000s, specifically Aymos’ niece, “who is always out and never comes back home sometimes.” The song Ababuyanga (meaning “they didn’t return”) on Yimi Lo is also about this.

“She stresses her parents out,” says Aymos about his carefree muse. A millennial in his mid-20s, he doesn’t relate to that lifestyle. “Me and my siblings, we never used to do that,” he says before adding that he loves the younger generation’s “energy”. “Ama2000s are really a vibe.”

In the album’s second half, Aymos introduces the listener to his Afro-pop roots and sensibilities. The song uYangibiza trades the customary hurried rhythm of amapiano for a steady traditional gospel bounce as he pulls off varying vocal tones and pitches.

He backs his alto with soprano vocals while singing about music luring him in, even when he tried to evade the calling. He paints a picture of his experience – from his spiritual connection to music to the opportunities his chosen profession affords him, even when they are dangerous.

“Now that I’m officially doing music, I’m seeing the other side of music that I actually never thought of,” he says. “So many temptations. In the club, you see this and that. And, there is so much freedom … you can literally do anything.”

But Aymos says he has evaded potentially destructive distractions by maintaining a level head. In many of the album’s songs, he shows himself to be a gentle and thoughtful individual, an avid disciple of love.

On the song Olwangempela, which leans towards jazz by way of a saxophone solo, he shares an optimistic outlook on romantic relationships. Even as South Africa’s tweeters declare umjolo (dating) a hazard that will end in tears, Aymos says reliable partners aren’t as rare as they are claimed to be.

On Risasekile, he emphasises the importance of effective communication in all relationships, while on Muhle and Ntombo, he promotes self-love and acceptance of the body’s natural appearance.

On the title track, which gives us yet another classic Afro-pop moment, Aymos revisits the theme of love personified in music. He sings, in its first verse, that it was Maphorisa who advised him to rid himself of fear and follow his heart.

Initially, assuming his parents wouldn’t approve of a career in music, young Aymos – born Amos Babili Shili in Tembisa – kept his intentions a secret. He took a gap year to buy time, telling his parents he needed to make up his mind about what to study.

“I needed to make it in music so that I could have something to show to my parents as assurance that this music thing is going to work, so they could allow me to do it full time.”

An Afro-pop artist at the time, Aymos released the single Zaka in 2019. Nothing came of the song, until an amapiano remix of the track went viral and became a national hit.

At first, Aymos was disappointed that the remix surpassed his original version. But, he quickly realised that fighting his fate was futile. It was when he started embracing the idea of incorporating his style into amapiano that his journey to stardom truly began.

The Zaka remix, which was released in November of his gap year, “saved” Aymos, placing him on the radar of amapiano stars Kabza De Small and DJ Maphorisa, and leading to his appearance on the super duo’s monster hit eMcimbini.

“The timing came through for me,” says Aymos, breaking down the meaning of the last song on his album, Ixesha, featuring Tembisa rapper Touchline.

“I was now needing to have a proper plan about which varsity to go to and what course to do the following year. But music came and rescued me at that very time. If it wasn’t for that, I’d probably be doing nursing somewhere in Pretoria.”

‘YIMI LO’ AND BEYOND

For Yimi Lo, Aymos retained his long-time producers Mas Musiq and TO Starquality, whom he worked with in his Afro-pop days. Other contributions came from Kabza De Small, Felo Le Tee, DBN Gogo and TheologyHD.

Among the album’s guest features is veteran house music superstar Zakes Bantwini, who appears on the song Matla, in which the singer encourages expatriates in Joburg to take care of their families back home.

Bantwini, Aymos says, gave him more than a studio session. The Durban dance music cornerstone imparted some eye-opening knowledge about the music industry.

“He spoke to me about the sacrifices I will have to make,” Aymos says.

“He told me about his background, how he came up and the things I should avoid. Most of the things he shared are things that musicians wouldn’t tell you – the musicians that have been in the game for a long time always shy away from the topic of royalties contracts and deals. But he went clean about it.”

After his conversation with Bantwini, Aymos was hit with the realisation that there’s more one can do in music than simply be an artist. He has other interests outside of music, but for now, as is clear in the album’s message, the young musician is enjoying his newly found success.