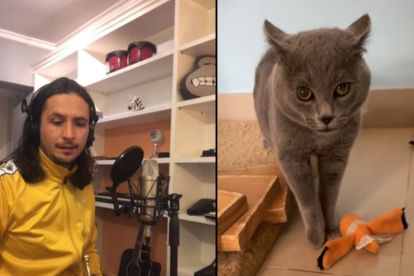 Electronic muso The Kiffness raised R100 000 for the Sandton SPCA from his ‘Cat Jams’ EP. Image via Facebook: The Kiffness

Electronic muso The Kiffness raised R100 000 for the Sandton SPCA from his ‘Cat Jams’ EP. Image via Facebook: The Kiffness

In 2021, David Scott aka The Kiffness collaborated with some cats to create a quirky EP, titled Cat Jams. In a matter of six months, the talented musician has managed to raise R200 000 in streaming revenue, donating half of the proceeds to his local SPCA in Sandton, Johannesburg.

The Kiffness can turn almost any sound into a cool electronic jam. From the Squid Game theme song to his unborn baby’s heartbeat, the Johannesburg-based musician is rather exceptional!

According to the 33-year-old musician, someone asked him if he would ever consider collaborating with a cat, but said that he was apprehensive because he had never done “cross-species collabs before”.

“I thought I should give it a shot. It turned out way better than I could have imagined.”

Creating the Alugalug Cat track is what sparked his collaboration with “Numnum Cat”. He went on to create the five-track EP Cat Jams which is available across all major streaming platforms, including YouTube and Deezer.

“Ryan Reynolds shared the song and it was going nuts.”

“Before I knew it, people were adding their instruments and their voices to the song and it became an international mashup.”

After releasing the EP, The Kiffness decided to donate 50% of the streaming revenue from Cat Jams to his the Sandton SPCA.

“My reason was simple – the EP would not have been possible without the cats and so, I wanted to make sure I was giving back in some way,” he told News24.

“Somehow, the streaming revenue to date from the likes of Apple Music and Spotify has added up to R200 000 in total.”

Taking to Facebook on 17 December, The Kiffness shared that he will continue to give back to the Sandton SPCA through his cat collabs. He announced the release of the Cat Jams Deluxe EP, saying he thought he would give the “cat songs” a break, but people kept sharing cat videos with him.

“I felt like I had no choice but to keep making them. So I hope you enjoy the Cat Jams Deluxe EP.”

You can stream the Cat James Deluxe EP here.