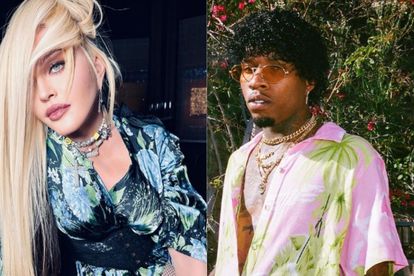 Madonna fired aim at Tory Lanez for the ‘illegal use’ of her track ‘Into The Groove’. Images via Instagram @madonna @torylanez

Madonna fired aim at Tory Lanez for the ‘illegal use’ of her track ‘Into The Groove’. Images via Instagram @madonna @torylanez

The Queen of Pop Madonna has taken aim at rapper Tory Lanez for the “illegal use” of her 1985 hit Into The Groove. The 63-year-old pop star boldly called Tory Lanez out in his Instagram comments…but he is yet to respond.

Madonna slid into Tory Lanez’s Instagram comments on his most-recent post to demand the rapper read his direct messages.

The pop star’s now-deleted comment read: “Read your messages for illegal usage of my song get into the groove.”

LISTEN TO ‘INTO THE GROOVE’

‘TORY LANEZ STOLE FROM THE WRONG ONE THIS TIME’

Reacting to the Grammy award-winning artists’ comment, tweeps seemed to show their support for her against Tory Lanez.

One tweep wrote: “Tory Lanez stole from the wrong one this time”.

“He really thought he could use an ucleared Madonna sample?”

“Madonna is about to have a huge paycheck from Tory dumb ass! Love to see that.”

NEW MUSIC FROM THE QUEEN OF POP?

The world has not heard new music from Madonna in a year despite featuring on Dua Lipa’s smash hit Levitating with iconic rapper Missy Elliot.

Taking to Instagram earlier this month, she teased new music sharing that she was in the studio captioning one of the posts: “Surprises in the New Year”.