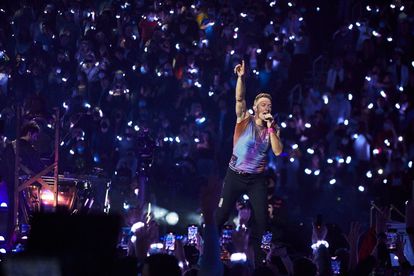 Coldplay rocked out at Seattle’s Climate Pledge Arena and played songs from their recently released Music Of The Spheres album.

At the performance, they included a heartfelt tribute to American rock band Pearl Jam. Funny enough, Coldplay frontman Chris Martin said the band shouldn’t upload it to YouTube but fans could not resist.

In the clip, Chris Martin says: “So because we’re here in Seattle we wanted to pay tribute to all of the bands that we fell in love with when we were just young teenagers in the 90s.”

“This is not Adele singing Make You Feel My Love, this is not what you’re about to see. This is a 44-year-old man remembering how much he fell in love with Pearl Jam in 1991.”

FROM THE DRUMKIT TO THE PIANO

Chris Martin invited Coldplay’s drummer Will Champion to step away from the drumkit and join him at the front of the stage on the piano for the cover. Martin jokingly said he had only learned the song 25 minutes ago.

“If Eddie ever hears this, I love you man. Thanks for being so kind to our band.” said Martin.

CHECK OUT THE ‘NOTHINGMAN’ COVER HERE

‘MUSIC OF THE SPHERES’

Coldplay released their Music of the Spheres album on Friday 15 October. The 12-track album marks the band’s ninth studio release and features Selena Gomez, Jacob Collier, BTS and R&B duo We are KING.

In celebration of the new album, they announced a world tour that aims to reduce carbon emissions in several ways including using “kinetic flooring” so fans can generate energy as they dance and planting a tree for every ticket sold.

Chris Martin pledged that the band would not be touring until they found more ways to be sustainable while on tour.

Their tour will kick off in March 2022 in San Jose, California and end off in September in Rio De Janerio, Brazil.