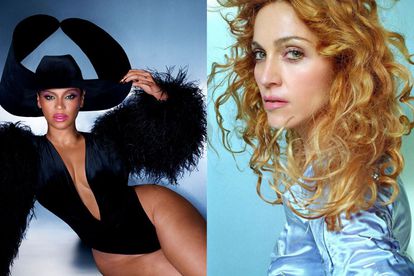 Beyoncé teamed up with Madonna on ‘The Queens Remix’ of her upbeat single, ‘Break My Soul’. Image via Twitter @BeyLegion @EletronicCandy

Beyoncé teamed up with Madonna on ‘The Queens Remix’ of her upbeat single, ‘Break My Soul’. Image via Twitter @BeyLegion @EletronicCandy

One week after the release of Beyoncé’s seventh studio album, Renaissance, the Grammy-winning singer is still receiving rave reviews from fans for tracks like Alien Superstar, Church Girl and Virgo’s Groove. In celebration of the album, Beyoncé has teamed up with the Queen of Pop, Madonna, on a remix of Break My Soul.

BEYONCÉ TEAMS UP WITH MADONNA FOR ‘BREAK MY SOUL’ REMIX

Break My Soul is the lead single for Beyoncé’s album, Renaissance, officially released on Friday 29 July. The 16-track album marked Beyoncé’s first solo album since the release of Lemonade in 2016.

The 40-year-old teamed up with Madonna for The Queen’s Remix of Break My Soul. The upbeat dance track heavily samples the Queen of Pop’s 1990 hit, Vogue.

In the song, Beyoncé gives a shoutout to some of the music industry’s most significant past and present stars. Jazz legend Nine Simone, Lizzo, Janet Jackson, Aretha Franklin and the singer’s sister, Solange all received shoutouts. The likes of R&B stars Chloe and Halle, Jill Scott, Alicia Keys, Rihanna and Nicki Minaj also received shoutouts.

LISTEN TO ‘THE QUEENS REMIX’ HERE

Taking to Twitter, social media users have praised Beyoncé and Madonna’s The Queen Remix of Break My Soul.

“And of course! Beyoncé and Madonna [are] here to save the day! WOW!!!!” wrote one tweep.

“I’m sorry girls, Break My Soul the original is cancelled from all DJ’s playlists. The Queen’s remix is the only one exists now. I don’t make the rules. You have to follow them,” wrote another tweep.

“Never thought I’d see the day there would be an official release with these two attached together.”

Several celebrities have taken to Twitter to share their reactions to Beyoncé’s shoutout on The Queens Remix of Break My Soul. Taking to Twitter on Sunday 7 August, Jill Scott praised Beyoncé’s heartwarming list of female artists.

“In a fas ass world, I register greatness gently, deliberately shower than admittedly most. I FEEL a thing and I can wholeheartedly say THIS IS MY FAVOURITE LIFE. I love you Beyoncé,” expressed Scott.

“I’m reading it and weeping h*e. Like… Can’t nobody tell me sh*t,” wrote Lizzo.