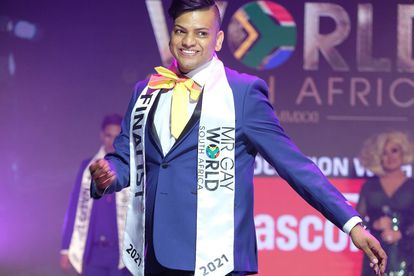 Benoni-based banker Shanon Kannigan is set to represent South Africa at the Mr Gay World 2022 pageant in Cape Town, Western Cape on 15 October. As per the organisation’s website, the pageant will be taking place in South Africa for the seventh time.

Mr Gay World is an international pageant for LGBTQI+ men. Every year, participating countries send someone to compete for the Mr Gay World crown. Over the years, South Africa has won the crown three times.

Shanon Kannigan took over as Mr Gay World South Africa from Bongs Ndima after he made shocking claims against the organisation earlier this year. Ndima handed in his resignation later after claiming that the organisation was “not so happy to pass the title to him”.

Kannigan was officially presented with his Mr Gay World South Africa sash at the annual Pink Loerie Mardi Gras and Arts Festival in Knysna on 29 April. Six months after the event, the 28-year-old will have the opportunity to represent Mzansi at the global Mr Gay World pageant in October.

2022 marks the seventh year that Mr Gay World is held in South Africa. The pageant is set to place between 9 October and 16 October with the grand finale taking place on 15 October.

“We look forward to welcoming delegates from around the world and giving them a platform in Cape Town to showcase their diversity, compassion and their philanthropy. I know that this contest will be an experience that will shape their lives in many ways for years to come,” said Jacques du Toit, the Mr Gay World director.

WHERE IS LOUW BREYTENBACH?

In August, it was reported that the Mr Gay World organisation as seeking a court order for Louw Breytenbach to retract “defamatory allegations” he made against them. Breytenbach refused to sign his contract calling it “unconstitutional and opaque”.