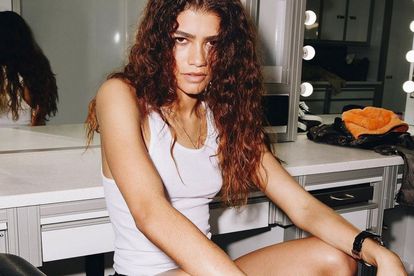 Zendaya Coleman is back on the Euphoria set for season two of the popular drama series. She shared three behind-the-scenes pictures via her Instagram Story account last week.

“Missed this kid,” wrote Zendaya at the top of a picture of her costar Angus Cloud.

She then shared pictures of crew members with the caption “and these kids”.

“Just being back in here in general… missed it,” she continued on the next post tagging the official Euphoria Instagram handle.

Directed by Sam Levinson, Euphoria follows Rue, played by Zendaya as she returns to high school after rehab. The series focuses on how she navigates her friendships and relationships as a recovering addict. Zendaya’s performance as Rue in the hit series won her an Emmy last year as she became the youngest Emmy winner in the best actress in a drama series category.

The first season of the series premiered with eight episodes in June 2019 and a month after its debut, it was renewed for a second season. However, production had to be halted due to the COVID-19 pandemic.

“I do miss Rue. She’s like my little sister in a lot of ways. And going back to that character is a home base for me. There is a beautiful second season that has been written, but in order to do it the way we want to do it, we need to wait until it’s safer,” said Zendaya in an interview with Instyle Magazine.

At the time, there was the idea of shooting a couple of bridge episodes to keep fans happy. These episodes were subsequently aired in December.

“There is an idea to do a couple of bridge episodes that can be shot safely but aren’t necessarily part of Season 2,” added Zendaya.

According to Dazed Digital, A24 will be releasing a collection of eight books of behind-the-scenes Euphoria footage. Each book will cover an episode and features a cast interviews with Zendaya, Alexa Demie, Barbie Ferreira, as well as never-seen-before photographs taken by Jacob Elordi.

The books will also include questions and answers with crew members.