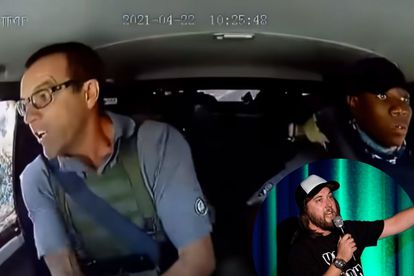 Ever since the attempted cash-in-transit heist that saw South Africa’s own Chuck Norris, Leo Prinsloo, dodge robbers like its no-one’s business, many are still in awe of the whole situation.

Ozzy, who is known for his “wildlife, sport, WTF vids, Game of Thrones and the odd movie reviews”, has more than four million subscribers on YouTube alone. After his “no bullshit” commentary has gone viral over the years, the man from Perth has set his sights on Prinsloo, who is now considered to be a South Africa hero.

The South African previously reported that armed robbers on the N4 highway, in Pretoria, attacked Prinsloo, security escort and police veteran, and his partner Lloyd Mtombeni on 22 April 2021. The pair managed to foil the attack and their heroic efforts went viral after dashboard footage surfaced on the internet.

“When we train people we usually tell people to pre-visualise what [they’re] going to do,” said Prinsloo. “It’s a mindset and that’s pretty much what happened.”

Prinsloo added that he pre-visualised what he was going to do and followed his instincts to the best of his ability. Fortunately, it worked out for him on the day, however, he also said that there is nothing that can “100% prepare you for a situation like that.”

Mtombeni told eNCA that it was only his fourth day working as a security escort and the first time he had experienced gunfire from inside the vehicle. Online spectators criticised Mtombeni for what they perceived as a lack of action.

Now, Ozzy says that this looks like a stressful job.

“There are some baddies on the freeway,” Ozzy says in the video that has been watched over 900 000 times. “Shots literally fired,” yells his friend and co-commentator, Mozza.

“He is probably quoting Bad Boys,” Ozzy continues. “This is not a movie, this is reality.”

Mozza says the whole thing reminds him of passing his driving test when he was 16.