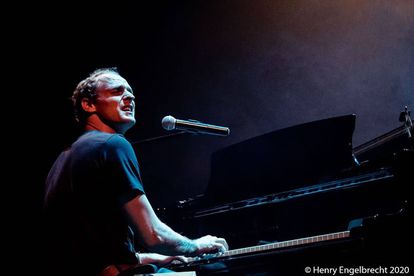 There, customers are blessed with a lively atmosphere, his unique live performances and his brother Moskou’s phenomenal food.

His debut anthology of poetry is also available in most bookstores and even on Drum’s UberEats menu.

When asked about his alias Reënwolf – “Rainwolf” in English – he responds with a mind-boggling analogy.

“I always thought we should all be rain. It made sense to me, as a member of the wolf family, to try and be more like rain while keeping my family ties. So, I’m the wolf that says, ‘wees reën’.”

Du Toit released his debut anthology, Warmer Voor die Tuimeldroër, earlier this year with a second one, Wintervallei (name still under consideration), on the way.

It contains 97 poems, including some of the most well-known Spoegwolf songs, such as Kort Donner, Bittermaan and Storm as well as loads of unknown material.

He says he primarily found inspiration for it in “love, death, and Harry Potter”. He says he doesn’t know what to expect from the second one. All he knows is that it has to be better than the first one.

Before we only knew Die Rivier as a single from Spoegwolf’s 2019 album Koma but recently it also became an online platform where artists can interact directly with the band.

Du Toit says the band is incredibly thankful for this because it has introduced them to an army of local artists.

“So many of them have contributed, making Die Rivier a monster of its own,” he says.

After the success of Moskou se Kombuis, a local TV kitchen talk show, he and Moskou with the help of family and friends went on to start the Stellenbosch restaurant Drum.

Not only do they provide A-class food and service, but they also use the restaurant as a vehicle for social change.

Through Drum, they have also taken on smaller ventures such as Drum Loud Coffee, a coffee brand.

“We believe in creating small things, and allowing them to grow,” he says.

On the show, Van Eeden talks to her overnight guests about their wishes, nightmares, most beautiful dreams and more. Du Toit was also directly involved in the series’ production work.

Then there was the VIA television show Spoegwold Soek Nuwe Bloed which the band filmed for DStv’s Channel 147.

For Spoegwolf Soek Nuwe Bloed, Du Toit and his fellow band members travelled around the country. In each episode, they met a different aspiring musician and together revisited some of Spoegwolf’s most popular songs.

When asked about a possible second season, Du Toit says: “I wish! Tell these VIA guys they must commission another one!”

The band is also going to be part of the first drive-in live music show in South Africa, Innikar. This will feature some of the country’s top bands, such as CrashCarBurn and Go the Rodeo.