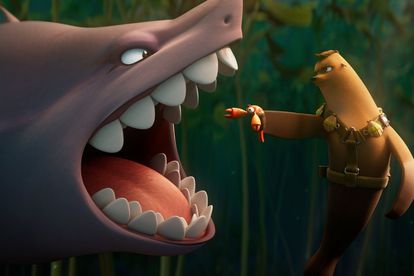 South African animation film directed by Greig Cameron and written by Wayne Thornley Seal Team hit Netflix on 31 December 2021. Since then, the film produced by the award-winning production company Triggerfish has broken onto Netflix’s most-watched list achieving the ninth spot in 27 countries.

Seal Team is an animation film that follows Quinn, a seal who spends his days in the waters off the coast of Cape Town, South Africa. Quinn rallies up his team of brave seals to fight back against the great white sharks in the waters.

South African actors who feature in the film are Sharlto Copley who starred in District 9 and the science fiction-action film Chappie. Legendary actor John Kani also stars in Seal Team.

According to Sunday World, one week after Seal Team was launched on Netflix, the animation amassed over 10 million hours of watch time around the world.

The publication also reports that the film achieved the ninth spot on Netflix’s most-watched list in 27 countries and had gathered a large fan base in Mexico, Paraguay, Mauritius, Reunion Island and South Africa.

Director Greig Cameron previously described the film as “a love letter to the silly over-the-top 80s and 90s action movies” he wanted to watch as a young boy.

“If electric eel cannons, flipper-to-flipper combat, leopard print speed boats and literally ‘jumping the shark’ sounds like your idea of a party, you’re going to enjoy Seal Team as much as I do.”

Greig Cameron’s co-director Kane Croudace described Seal Team is “an inspiring underdog story” that everyone at Triggerfish Studios could relate to.

“It’s about a hero who is brave enough, stupid and crazy enough to want to do the dangerously impossible.”

“That’s a theme that resonates throughout my working career. Right at the beginning of my time with Triggerfish, we wanted to make a feature film at the bottom of Africa with a totally inexperienced crew, which everyone said was impossible. We went and did it anyway.”