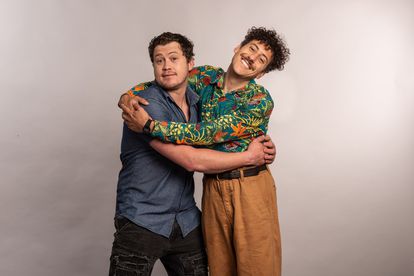 Schalk Bezuidenhout will be Francois Jacobs’ wingman on the new season of ‘Op my Eish!’. Image: Sean Brand

Schalk Bezuidenhout will be Francois Jacobs’ wingman on the new season of ‘Op my Eish!’. Image: Sean Brand

Will the charming actor and presenter Francois Jacobs find love in the new season of Op my Eish!? Viewers can tune in from Thursday 14 April 20:00 on kykNET (DStv channel 144) when the big hit reality show kicks off.

In November 2021, ladies had the chance of entering with the hope of being one of those that will catch Francois’ eye. Out of all the entries, Francois chose 15 ladies he would like to get to know better. They will also find out just how much Francois loves adventuresome activities of which they will partake including canoe trips, motorbike rides, and bungee jumping.

There will also be enough opportunities for him to spend some alone time with the ladies. But finding love isn’t only moonshine and roses – Francois will need to make the difficult decision on a regular basis of who to send home next. Fortunately, he has his wingman, the comedian, and actor Schalk Bezuidenhout, who will support him on this journey.

“As the saying goes: Those who can’t, teach,” said Schalk who recently starred with Francois in the comedy Kaalgat Karel. “There were times when I was useless in my love life. Eventually, I found the right partner, but it was a struggle. I think that has made me a good adviser. I’m also a good listener. If Francois is in doubt or needs a shoulder to cry on when things get tough, I’ll be there.”

He says he doesn’t intend to influence Francois’s choices. “He has to listen to his heart, but it gets complicated when only a few women are left. What do you do when the last three are all wonderful, but you have to choose only one? In a case like that, he will need a soundboard.”

Shooting in the Lowveld

“He is Nelspruit in human form,” Schalk said further. “He represents Nelspruit, whether they like it or not. I think that’s where he’s going to be in his element.”

Of course, shooting in the Lowveld also had its challenges.

“One of the biggest challenges was the heat and humidity in the Lowveld,” said Gideon Eksteen, executive producer at Wakanda Media, the production company that produced the series. “That, as well as all the activities, not only challenged the production team, but all the women as well who kept on saying: ‘It is so tough, but so much fun’.”

As with the first season, viewers can expect more a lot of drama and intrigue – from broken hearts and injuries to unexpected introductions and shocking disclosures. Viewers could not ask for better reality TV!

The second season of Op my eish! starts on Thursday 14 April at 20:00 on kykNET (DStv channel 144). It will also be available on DStv Catchup.