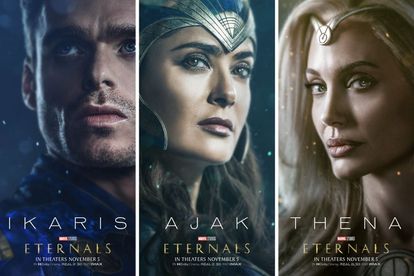 Pre-ticket sales have opened in South Africa at Nu Metro and CineCentre for the weekend of 5 November 2021.

Eternals follows a group of heroes from beyond the stars who had protected the Earth since the dawn of man. When monstrous creatures called the Deviants, long thought lost to history, mysteriously return, the Eternals are forced to reunite in order to defend humanity once again.

According to IndieWire, Zhao said that the visual experience for this film must feel immersive enough for the audience to believe that these superhero characters have walked the earth for 7 000 years.

“So, to do that, there’s what I like to call an anthropological way of capturing things. The cameras are very grounded, and the movements are very natural. Shots are longer — we use wide-angle lenses, and deep focus…it’s about giving the audience the space and the time to be able to explore what’s within the frame, and therefore come to their own conclusion of the relationship between the characters and the space they’re in.”

The latest two Marvel Studios movies to be released include Shang-Chi and the Legend Of The Ten Rings and Black Widow, where Natasha Romanoff confronts the darker parts of her ledger when a dangerous conspiracy with ties to her past arises.