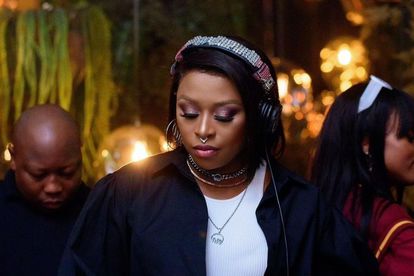 South African DJ and businesswoman DJ Zinhle’s reality show has been trolled on Twitter following the fourth episode which aired on Saturday 9 October.

The Umlilo hitmaker announced her pregnancy in the trailer of her surprise reality show in August. In her Instagram announcement post she revealed that her reality show will give fans an inside look at her notoriously private life.

“I have exciting and UNEXPECTED news for you this evening 😁🤞🏾Allow me to introduce my very own reality show coming to @bet_africa channel 129 this September!I know this is unexpected but I’m so excited to share this part of my life with you all! See you on the 18th, right? #BETDJZinhle 👸🏾,” the post was captioned.

The reality show was shot from the time the businesswoman was around four months pregnant. At the time, she was keeping her pregnancy under wraps because of her business deals.

“We were still able to keep the intimacy of the pregnancy, it was still private, even though now, at a later stage, people have insight into what was happening,” she said in an interview with The Citizen.

The first episode of the series premiered on 18 September. In the episode DJ Zinhle opened up about how she felt when she was dragged into Nelli Tembe’s death. Nelli Tembe is the late fiancee of AKA, the father of DJ Zinhle’s eldest child.

On the second episode of the show, DJ Zinhle began the process of telling her nearest and dearest that she was pregnant. She also revealed why she does not want to marry the father of her second child, Murdah Bongz.

On the third episode of the series, DJ Zinhle is yet again nervous about revealing her pregnancy. In the episode she had surgery done because her cervix was weak and the doctors did not want it to tear while she was carrying her baby.

She also revealed that DJ Oskido gifted her R200 000 when he found out she was pregnant with Kairo Forbes.

The fourth episode of DJ Zinhle: Unexpected sees the businesswoman telling DJ Oskido about her pregnancy. She also attempts to tell her first born Kairo but the six-year-old threw herself under the bus when she admits she cannot keep a secret!

TWEEPS ‘BORED’ OF THE STORYLINE

Following each episode, the reality series tops the Twitter trends list. While most episodes had Tweeps love struck. The last episode seemed to have fallen flat because Tweeps said that they were becoming bored of DJ Zinhle telling a new person she is pregnant in every episode.

However, not all Tweeps were trolling the show. Some still liked the content.