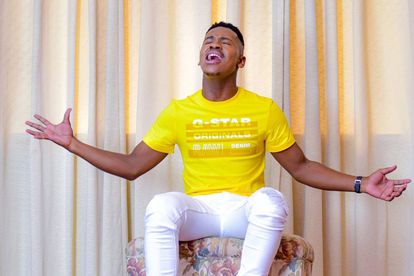 Idols SA has changed the lives of many contestants who have appeared on the show. Some were lucky enough to receive recording contracts and live their dreams as singers. One contestant whose life changed drastically after the competition is 22-year-old Lungisani Mthethwa aka Mr Music. He shared that prior to entering Idols SA he could not afford to spend more than R100 on clothing.

Lungisani Mthethwa aka Mr Music was born in Richards Bay, Kwa-Zulu Natal and entered season 16 of Idols SA in 2020. Mr Music walked away from the competition show as the runner-up and Zama Khumalo took home the first prize.

Speaking to Drum, Mr Music shared that although he studied towards an electrical engineering qualification, music is something he has always wanted to pursue. Although Mr Music did not win season 16 of Idols SA he says he took the show as a stepping stone.

HOW LIFE CHANGED FOR HIM

The 22-year-old artist shared that before Idols SA he could not afford to spend R100 on clothes.

“Life for me changed a lot, to make it this far and be able to spend more than that makes me realise that life has changed, positively. Life is good, I can afford to spend more than R1 000 which before the show was like a million to me.”

He says his faith is what has kept him going and also took a moment to give a word of advice.

“Sometimes things will not go the way we want them to, because God has the final say. Therefore, to make it anything one needs to pray, focus and have passion for what they are doing.”

After reaching the top five stages of the competition, Mthetwa along with four other finalists were signed to Kalawa Jazmee. He enjoys the afro-pop genre and said he noticed that his fans enjoy the genre too. In the future, he hopes to branch out into gospel.

Mthethwa released his second single on 1 October titled Wangigila Khanyi, he took to Instagram to share the release of the single with his fans. Mr Music’s debut album is set to be released in January 2022.