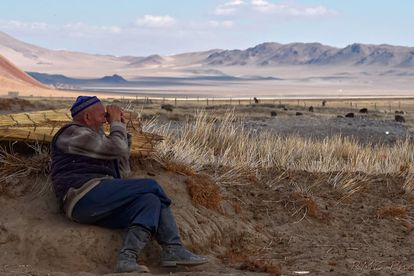 Watching over the flock in a scene from ‘Life in a Day 2020’. Image by Bob Glennan / Flickr

Watching over the flock in a scene from ‘Life in a Day 2020’. Image by Bob Glennan / Flickr

On 25 July last year, people from across the world filmed their lives and shared their stories to be part of a documentary film titled, Life in a Day 2020. The crowdsourced documentary film is a sequel to the 2011 version of Life in a Day and premiered at the Sundance Film Festival on 1 February 2021, and on YouTube on 6 February.

Produced by Oscar-winning filmmaker Kevin Macdonald, director of The Last King of Scotland (2006) and the climbing documentary Touching the Void (2003), the 90-minute documentary film features a range of selected video clips (vlogs) sent in from people all over the world talking about themselves and showing them doing things on one day: 25 July 2020.

MacDonald received 324,000 videos from 192 countries, representing 65 languages. The clips and vlogs are organised loosely from morning to night-time and show people going about their daily lives, essential workers completing thankless tasks, people sharing their hobbies, talking about losing loved ones or their jobs and homes, and others sharing special events, religious practices, and hopes and fears for the future.

The diverse, poetic, globetrotting snapshot of life in various places around the globe on a single day acts as a time capsule, capturing the lived day-to-day experiences of different people during a time of great political upheaval and stress.

The film highlights the commonality of the human experience, despite superficial differences.

Kevin Macdonald said in an interview with Variety magazine that he sees the film as a “time capsule” for the ages.

“We’re definitely not trying to tell the story of COVID. We’re just trying to show people’s lives. It’s about what is important in your life today – what’s the emotional story you are telling today.”

The docu-film features moving vignettes from political commentary to break-ups, make-ups, and babies being born. Moving clips include a man in middle of the US in his car after the pandemic eliminated his job and worrying that his country will descend into anarchy; a Japanese woman breaking up with her boyfriend; and a lonely herder on the vast plains of Bayangol in Mongolia.

One woman plays a video of her son in a funny clip from the prequel to Life in a Day 2020 and then pans her camera to an urn, where her son’s ashes are contained after his recent death from COVID-19.

In an interview at the Sundance Film Festival 2021, MacDonald said:

“The films are amazing levellers. They really make us feel as a viewer that ‘everyone is like me. I can see they care about the same things as I do whether they are Egyptians or Congolese or Siberians’. They care about the same basic things. There are very few strong, powerful parts of human life that we don’t share.”

In a time of COVID, the director added, “to be reminded of our common humanity has got to be a really, really good thing.”