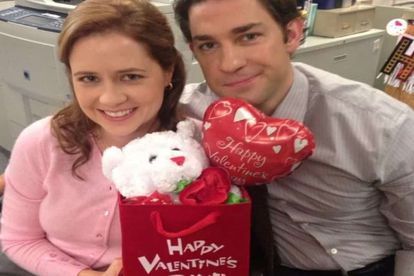 Jim and Pam turn on the romance on Valentine’s Day in an episode of ‘The Office’. Image via Instagram @theoffice

Jim and Pam turn on the romance on Valentine’s Day in an episode of ‘The Office’. Image via Instagram @theoffice

On 1 January, Netflix brought all nine seasons of the classic sitcom The Office to South Africa.

This followed the sitcom being removed from Netflix US to move back to NBC after they reached a five-year deal to put the series on their new streaming service, Peacock. According to Variety, The Office was the most streamed TV show in 2020.

The Office follows the work and personal lives of a group of typical office staff and their wildly inappropriate boss, Michael Scott who work for a mediocre paper company called Dunder Mifflin .

You may recognise him from this viral meme,

Here are ten of the series most romantic episodes to stream this Valentines Day.

Season One only had a few episodes, but Season Two picked up with a whole Valentine’s Day-themed episode where manager, Michael is away attending a corporate meeting in New York with Jan and to everyone in the office’s envy, the most unexpected lady receives the most Valentine’s Day gifts.

You may also have seen this meme from this episode:

The Season Two season finale is all about love with Michael finding himself trapped in a love triangle and the day Jim first tells Pam how he feels about her with a little hint of affection from Dwight to Angela.

Episode 15 of Season Three is the first wedding the co-workers attend together, it is Phyllis and Bob Vance’s big day and Michael is there to over play his role, in support of team bride.

The Fun Run episode where Michael organises a charity run for the employees after a freak accident. This is also the episode where Jim and Pam go public with their love and Dwight destroys Angela’s personal property.

In this episode, the office gets robbed and Michael holds an auction to raise money for the lost items. The romance lights up the seriousness of the episode when Michael and Holly get an early start on their date night.

Possibly the most romantic episodes of all nine seasons is Jim and Pam’s two-part wedding episode that takes place in the beautiful location of Niagara Falls where all The Office staff go along on the ride with a few surprises on the way.

Another Valentine’s Day-themed episode that sees Michael and Holly’s public display of affection that makes everyone else rather awkward.

This episode takes viewers on a journey of Andy going to Get The Girl as he heads to Florida to sweep Erin off her feet.

In the series finale the staff of Dunder Mifflin gather for a surprise wedding to end the show with the happily ever after.

Here are some of the best Michael Scott memes: