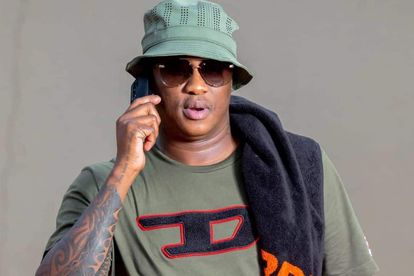 This is the smile you have when the most bashed show is number one in the country.
Image via Twitter/@official_jubjub

This is the smile you have when the most bashed show is number one in the country.
Image via Twitter/@official_jubjub

Popular reality show host and rapper Molemo “Jub Jub” Maarohanye has people talking again. This time it is not for the crime he went to jail for, but instead for a new reality television show.

Jub Jub recently appeared on Somizi’s cooking and talk show Dinner at Somizi’s and spoke about his life in prison, his extremely successful show Uyajola 9/9 and more. That includes his new show, You Promised to Marry Me.

When people mention the name Jub Jub, it is usually coupled with his 2012 conviction for culpable homicide. He killed four school kids while he was racing in his car with friends in Soweto.

He sees that as God’s way of forcing him to slow down, because he was living a very fast-paced life.

“I grew up in church but, after hearing my sentence of 25 years, I truly heard God speak to me. After bowing my head, all I could say was amen,” Jub Jub said at the time.

Prison life can be traumatic for anyone, but little did the musician know that he would find brothers there, and eventually change lives.

“I was thrown into the lion’s den but those lions did not harm me, instead they protected me,” said Jub Jub.

“Upon my release, I was able to provide some of them with employment because the government will not employ them with criminal records. And they have families to feed.”

Since his release, Jub Jub has been involved in two very successful television shows, Uthando Noxolo and Uyajola 9/9. Both have aired on DStv’s Moja Love channel.

Uyajola 9/9 helps lovers, who suspect their partner is cheating, to confront their partner and the results can be messy. People may cry out about Uyajola 9/9 on social media and ask for it to be cancelled, but the numbers show the opposite.

According to one major South African news website, 2.8 million people tuned into Channel 157 every Sunday in June for a double-bill of Uyajola 9/9. This made it the No 1 show in Mzansi.

The electrifying season finale on 30 August saw Jub Jub thrown into a pool. He then premiered another show, called You Promised to Marry Me, the following Sunday.

‘You Promised to Marry Me’

The title alone was enough to get people talking. And with the drama that unfolds on it, it might take the show to the same heights as Uyajola 9/9.

The title explains what it is. Basically, if someone promised to marry you but to date has not followed through, Jub Jub and the team will help uncover what the delay is about.

You Promised to Marry Me may even drape you in a white wedding dress and throw a bridal party, as well as wedding songs, into the mix.

Get some popcorn and be ready to laugh out loud because the new show is nothing short of entertainment.

Golden Arrows star: Kaizer Chiefs stand no chance against us