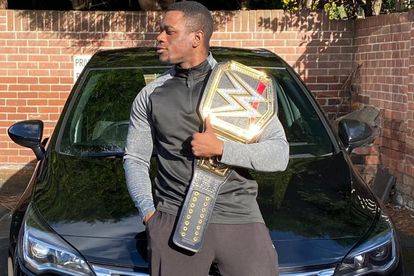 They say everyone has a twin in the world – and now John Cena has met his match! What’s more fascinating is that his lookalike is black!

The wrestling veteran and action screen star posted a picture of his doppelganger on his Instagram account…and the public were amazed – and entertained – to say the least.

Many of his followers used the comment section to give the man — identified as 24-year-old  Brendan Cobbina — a new name based on his striking similarity to John Cena.

“Deshaun Cena”, “Jamal Cena” and “Javonte Cena” were among the top picks in an unofficial poll among the star’s followers.

‘JAMAL CENA’ LAUGHING ALL THE WAY TO THE BANK

One look at his social media accounts and it’s quick to see that the British bodybuilder has embraced his likeness – even calling himself the “black John Cena” in his Twitter biography.

He’s even capitalised on his new-found fame by starting a podcast about fitness and has signed up many new clients as a personal trainer.

And his Twitter followers have also joined in on the fun, sharing hilarious memes comparing the two.

It’s not just John Cena who has recently found his long-lost twin – a number of Olympic stars are also getting noticed by fans who think they resemble Hollywood A-listers.

Jordanian taekwondo athlete Julyana Al-Sadeq has been compared to pop star Lady Gaga, and it’s easy to see why.

Many Olympic viewers were convinced — and confused — that the singer was appearing on their TV screens.

Then there is Canadian ice skater Tessa Virtue who has been linked to Katy Perry over her dark hair and doe eyes.

And many think Belarusian cyclist Vasil Kiryienka looks like an older version of US actor Neil Patrick Harris.