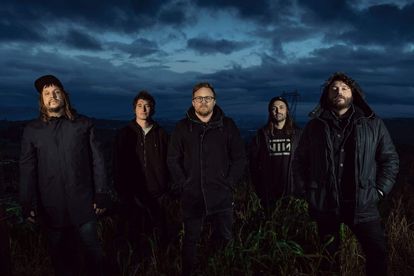 Formidable Afrikaans alternative rock group Fokofpolisiekar (FPK) have compiled a collection of four new songs – their first new material since the release of Selfmedikasie in 2017 and an EP Droom Hoog in 2018.

The group, which was formed in 2003, has carved out a solid reputation in the local Afrikaans rock industry since the release of As Jy Met Vuur Speel Sal Jy Brand in the same year.

Due to the expletive contained in the group’s name, they are also commonly referred to as Polisiekar or FPK.

The South African cornered FPK’s Hunter Kennedy for a Q&A session around their latest release and this is what he had to say:

‘Kajuitkoors’ has a ’90s punk/college rock sound that recalls the sound of your early FPK days. Did lockdown restrictions and the notion of a ‘police state’ play a role in the ‘voice’ of the EP?

Oh definitely, yes. It was scary to me how quickly liberties we take for granted were taken away from us. It was irritating not to have a choice in the matter. I think once the fear subsided, everyone felt the frustration.

I would say Kajuitkoors is a collage of fever dreams: It’s existential fear, mixed with panic and conspiracy theory.

On your Facebook page, you mention that ‘Kajuitkoors’ has hit the ‘Americas’. Do you find that despite your lyrics being Afrikaans, your vibe and sound cross the language barrier?

It’s hard to be sure, but one can hope!

Are you planning any live stream shows to promote ‘Kajuitkoors’?

The guys are looking into an acoustic live stream at the end of the year. More details to be announced at a later stage.

Lockdown has played a big role in the creation of this EP, but how did you manage to stay in the creative zone and collaborate during the pandemic?

We are quite used to writing “Postal Service”-style online. So the actual way in which we wrote was nothing new. Initially I didn’t want to write about the glaringly obvious situation, but then I gave in.

I think it might count in our favour to be writing about a shared experience. First time in my life something has impacted the entire globe on such a physical level.

Each song is so unique and evokes a different emotion. What message did you want to convey with ‘Kajuitkoors’?

The message will become clearer as time goes by. Hahaha. I am not sure of the EP’s message to be honest. Lyrically, I tried to relay my feelings without too much judgment. Each song has a theme: Something like Frustration, Denial, Justification, Mourning. It’s not so much one specific sentiment.

I hope Kajuitkoors serves as a time capsule that we can refer to in the future when we’ve forgotten what 2020 was like.

You say that the song ‘Raak Siek Raak Gesond’ was inspired by Merwe Marchant le Roux. Could you elaborate on this?

Merwe is a life-long friend at this point and so, except for inspiring me in general with his artistry and happy-go-lucky demeanour, the thing that directly inspired this song is a design he made featuring a Yin-Yang and the words “Raak Siek Raak Gesond”.

I love it because although most people would see it in the context of the pandemic, I actually think it has to do with the fact that through early detection he managed to sidestep cancer. There is a lesson for us all in there somewhere. Love you, Merws!

‘Kajuitkoors’ arguably sports one of the best FPK covers to date. What was the inspiration and process behind creating the cover? And who designed it?

The designer is MJ Du Preez, also known as @spookwolf. He did a design for Francois van Coke and Jan Blohm on their collaboration and we all loved it.

We struggled with the title and ended up with Kajuitkoors which translates to “Cabin Fever”. I think it’s relatable.

MJ did a stellar job of portraying the feeling of the EP and the feeling of our time, I think. It portrays a skeleton clawing his way out of a universe shaped like a pill. There was a lot of back and forth, but mostly it was just the colour options.

Everyone in the band is old and opinionated now, so it takes a little longer to get sh*t done. Hahaha!

‘Kajuitkoors sounds like a mix between NOFX and Coenie de Villiers’. Do you think Coenie would be flattered by this comparison you’ve made? And would Coenie ask for a future collaboration!?

Coenie is the best! I hope he feels flattered. I just wanted to name-drop him in our press release.

But truthfully, he is the king of Afrikaans piano ballads and he is mentally not that far removed from NOFX as some people might think. I’ll collaborate with Coenie any day!

What do you do – or recommend others could do – to break the feeling of cabin fever in 2020?

Listen to the EP at full blast in your car, sing along and swear as loud as you can! Get that sh*t out.

Go outside. Go somewhere in nature where you don’t have to wear a mask. Talk to friends you haven’t seen in a long time. Drink water out of a fresh mountain stream. Turn off the TV and your cellphone. Actually go to a cabin! Marijuana works for me as well.

‘Kajuitkoors’ quickly climbed the charts on the iTunes list. And as of Monday morning (5 October), it hit the No 1 spot, topping Metallica. How do you feel about that?

I didn’t know about that! That’s amazing! Yes, I think most of us are Metallica fans. The favourite albums will differ. Alan’s (our multi-talented merch man…but so much more) favourite album is St Anger.

We want to make a full-length and have a birthday party!

Which bands have you listened to lately?

I listened to Offspring’s Smash quite recently. Loved it! Digging Joan Jett and the Blackhearts too. Also digging easy soul from the ’60s and ’70s and I always listen to Canadian punk rock band Propagandhi.

The lyrics from their 1996 song State Lottery still ring true for me today.