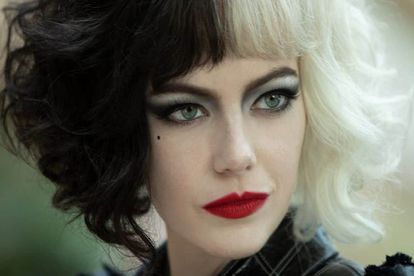 Cruella is based on the early years of the legendary villain Cruella de Vil, played by Emma Stone. Disney dropped the official trailer for Cruella on 17 February and the film is set for release on 28 May.

“From the very beginning I realised I saw the world differently than everyone else. That didn’t sit well with some people. But I wasn’t for everyone. I guess they were always scared that I’d be a psycho.”

WATCH THE TRAILER FOR ‘CRUELLA’

In under 24 hours the trailer racked up five million views. Cruella is described as “brilliant; bad; a little bit mad”.

WHAT TO EXPECT FROM THE FILM

Cruella de Vil was first seen in the 1961 family film 101 Dalmatians and since then has appeared on screen countless times. Cruella will take viewers on a somewhat different journey, and imagines this infamous storybook, stage and film villain’s early years.

Set in London in the 1970s, during the punk rock revolution, the film follows young creative Estella who is determined to make a name for herself with her designs.

Similar to the plot of 101 Dalmatians, Estella befriends a pair of young thieves and together they build a life on the streets of London. Estella’s passion for fashion catches the eye of fashion legend Baroness Van Hellman, played by Sense and Sensibility star Emma Thompson.

The relationship between Estella and the Baroness leads to Estella tapping into her mean streak and becoming Cruella de Vil.

The film is directed by I Tonya director Craig Gillespie, and the screenplay is by Dana Fox and Tony McNamara. The story was written by Aline Brosh McKenna, Kelly Marcel and Steve Zissis.

A day before the trailer release, Disney also dropped the official artwork for the film.

La La Land actress Emma Stone, along with Michelle Wright, Jared LeBoff and Glenn Close, are the executive producers of the film.

TRAILER HAS A ‘JOKER’ FEEL

In the comments on the Twitter post, many Tweeps thought the trailer had more of a Joker feel than a 101 Dalmations feel. This could also be because Stone’s make-up resembles that of Harley Quinn.

The film has been in the making for at least two years but was delayed due to the coronavirus pandemic. There is no official news yet on when Cruella will be on the Disney+ streaming service.