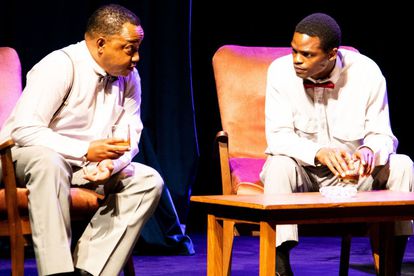 ‘Bloke and his American Bantu’ is set to his the South African State Theatre in Pretoria on 7 July. Image: Supplied

‘Bloke and his American Bantu’ is set to his the South African State Theatre in Pretoria on 7 July. Image: Supplied

The South African State Theatre in collaboration with the Sello Maake kaNcube Foundation, will be showcasing the stage play, Bloke and his American Bantu from 7 to 24 July. The play is written by Dr Sipho Mahala and directed by award-winning actor and director, Sello Maake ka Ncube. The two-man play ran for three nights at the National Arts Festival in Makhanda between 23 June and 25 June.

‘BLOKE AND HIS AMERICAN BANTU’

Bloke and his American Bantu relives the friendship between Bloke Modisane and Langston Hughes, two writers and activists from Sophiatown, South Africa and Harlem, New York. The stage play is set in the 1960s when Modisane was exiled in London and Hughes organised a string of lectures for him across the United States.

The play also focuses on the letters exchanged between Modisane and Hughes between 1960 and 1967, a time when both writers wrote well over 50 letters to each other.

Bloke Modisane is best known for his work as a journalist at Drum magazine and later became one of “the Drum boys” in the 1950s. His good friend, Langston Hughes, is particularly known for his portrayals of black life in the United States from the 1920s through to the 1960s.

WHO WILL BE PLAYING MODISANE AND HUGHES?

The character of Bloke Modisane will be played by Anele Nene, who is fairly new to the theatre industry. The 25-year-old, who studied Performing Arts and Production, won the Ovation Award at the 2020 National Arts Festival for his one-man show, The Hymns of a Sparrow.

Alongside Nene will be award-winning writer, actor and director, Josias Dos Moleele, who plays the role of Hughes. Dos Moleele is known for appearing in Clint Eastwood’s Invictus and the BBC television series, Strike Back.

The chemistry between the two actors is palpable as they bring to life a slice of history that not many know about.

Bloke and his American Bantu will run from 7 July to 24 July at the South African State Theatre in Pretoria. There will be performances from Tuesdays to Sundays weekly.

Tickets are available here for R130 each.