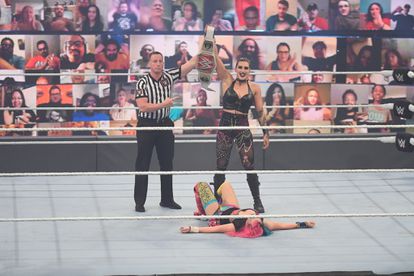 Kicking off the night was Ricochet who, try as he might, was unable to overcome United States Champion Sheamus in a non-title bout on the Kickoff show. While The Celtic Warrior issued an open challenge, he declined to put his title on the line, and despite digging deep, Ricochet couldn’t keep Sheamus down, with the champion sealing the first win of the night. Ricochet may have left without a title but he did make off with Sheamus’ hat and coat.

The Nightmare isn’t over just yet

Raw Women’s Champion Rhea Ripley survived both Asuka and Charlotte Flair in a star-studded Triple Threat Match to retain her title at WrestleMania Backlash. The fast-paced, intensive action was all systems go with all competitors trading blows.

But in a telling moment, with Charlotte knocked outside the ring, Ripley took advantage by blindsiding Asuka with the Riptide, pinning her for the hard-fought win.

It was then the turn of Rey & Dominik Mysterio who claimed the SmackDown Tag Team Title as they overcame Dolph Ziggler & Robert Roode. Rey stunned Ziggler & Roode with a picture-perfect game plan of fast-paced offence. Dropping Roode with a 619, Rey took out Ziggler after tagging his son, who delivered a frog splash to Roode for the stunning three-count, minting the Mysterios as the first father-son Tag Team Champions in WWE history.

But then something out of the ordinary happened… The dead were raised, and so was the hand of The Archer of Infamy: It was Damian Priest who defeated The Miz in the Lumberjack Match, overcoming a horde of zombies as well as The A-Lister.

With the arch-rivals set to square off, zombies overran the WWE Thunderdome, and they stopped Miz and John Morrison’s every attempt to flee, leaving Miz with no choice but to enter the ring with Priest, with the two enemies temporarily working together to fight the zombies. Morrison returned to ringside to help the Miz, only to find himself taken captive by the zombies. Priest dropped The A-Lister with the Reckoning for the three-count and made a quick exit as the zombies overtook the ring and seized upon The Miz, leaving him to suffer a fate unknown.

The EST of WWE is still the SmackDown Women’s Champion thanks to a gusty and clever victory, as Bianca Belair prevailed over Bayley to retain the title at WrestleMania Backlash. Belair took clear control from the opening bell, using her signature swagger to dominate the much more experienced Bayley. But The Role Model demonstrated her time-tested ring IQ, wisely regathering herself on the outside before grabbing Belair’s earring to take the offensive and pummel Belair.

Belair later shockingly kicked out of the Bayley-to-Belly in the nick of time. While the challenger looked to use Belair’s ponytail to help apply the Rose Plant, The EST one-upped her, using it to creatively wrap Bayley’s legs and secure the pinfall.

Bobby Lashley’s brains can be credited with his victory and WWE Championship retention against Braun Strowman and Drew McIntyre in a mammoth Triple Threat Match. The All-Mighty initially joined McIntyre for a short-lived alliance against Strowman, with the two rivals begrudgingly working together to execute a double suplex on The Monster Among Men.

McIntyre and Lashley battled throughout the WWE Thunderdome, with The Scottish Warrior repeatedly ramming The All Mighty into the entrance set before sending him crashing through it, causing a spark explosion. Strowman though scored a near-fall back in the ring, and McIntyre regathered himself to down The Monster Among Men with a Claymore, putting his third WWE Championship win insight. But Lashley stunningly re-emerged, tossing McIntyre to the outside and flooring Strowman with a massive Spear, stealing the moment of opportunity away from McIntyre for the victory.

Even after a courageous effort by Cesaro, Universal Champion Roman Reigns still sits at The Head of the Table. Early on, Reigns appeared to injure Cesaro’s right arm. The Big Dog continued to brutalize the arm, quickly putting the challenger in desperate territory and leaving him unable to deliver some of his signature offence.

The Swiss Superman’s apparent injury proved most costly when it caused Cesaro to fail a Neutralizer attempt, and Reigns took advantage by countering Cesaro’s springboard attempt with a massive Superman Punch. Cesaro escaped Reigns’ initial attempt at the guillotine but later found himself trapped in the hold. He seemingly used his last remaining strength to slam The Head of the Table, and Reigns still refused to relinquish the hold, putting Cesaro out for the referee stoppage. But, it was Jey Uso who came to the ring seemingly to repent, presenting The Tribal Chief with a ceremonial lei and blasting Cesaro with a superkick.

The nightmare ending to Cesaro’s fairy tale only worsened, as Seth Rollins delivered a ruthless beatdown, sickeningly wedging Cesaro’s arm in a steel chair before slamming it against the ring post. The SmackDown Savior added an exclamation point with a vicious Stomp, leaving the man who defeated him at WrestleMania in pieces.

Watch all the highlights on SuperSport WWE (DStv channel 236) and WWE Network.