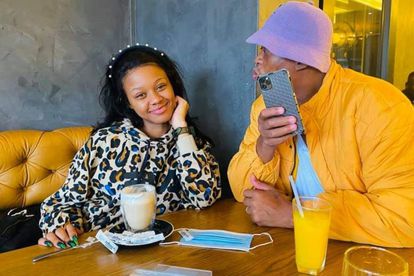 Mampintsha threw shade at his mother, Zama Gumede, via a social media post and also teased a new song following the accusations she made in a YouTube video that Babes Wodumo has been faking her pregnancy.

BABES TO PRESS CHARGES AGAINST MOTHER-IN-LAW

Following gqom singer Babes Wodumo and Mampintsha’s traditional wedding last week, the mother of the groom publicly called out the bride for faking her pregnancy. This was done in the form of a video that was addressed to Wodumo and her family which went viral on social media.

Wodumo did not take her mother-in-laws allegations lightly and said she was going to press charges against Gumede for dragging her name through the mud.

“I am going to press charges against her for humiliating me in public and for swearing at me. I don’t understand why she is dragging my name in the mud,” Babes Wodumo was quoted as saying in Daily News.

Former Big Nuz member Mampintsha had been quiet about the ongoing fight between his new wife and his mother. It seems he has had enough though.

Mampintsha took to Facebook to post a picture of himself with his bride where they appear to be having breakfast with a fresh-faced Babes Wodumo. The post is captioned:

Roughly translated to English, the post means that Mampintsha is with the mother of “sponge” which could be the nickname of the baby they are expecting. This seems to be Mampintsha clapping back at his mother accusing Wodumo of faking her pregnancy as he acknowledges her as his unborn baby’s mother.

The caption also refers to the artist’s upcoming song. Mampintsha seems to be going with “spontshi” meaning “sponge” as the baby’s nickname, as well as the title of his new single.

Mampintsha is also calling on fans and young designers to put together artwork for the single that is expected to drop next week. Artists can send their submission via WhatsApp to 081-511-7847.

According to IOL, Wodumo said Gumede was drunk in the video and she was upset about not being more involved in the preparations for her son’s wedding.

“I know most of the things she says when she is drunk should not be taken seriously, but this time she has gone too far. I am going to press charges against her. I want her to clear my name,” said Wodumo according to IOL.