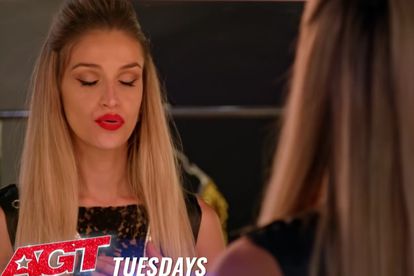 Léa Kyle, contestant on ‘America’s Got Talent’. Image via screenshot from YouTube.

Léa Kyle, contestant on ‘America’s Got Talent’. Image via screenshot from YouTube.

Magician, Léa Kyle blew away the judges on American talent show competition, America’s Got Talent with her world class quick-change act on 29 June.

The clip of the magician’s impressive quick-change act went viral with over 7.6 million views on YouTube.

25-year-old Kyle, who is from France, decided to combine her two passions – fashion and magic for her performance. She started off her performance in a black dress and leggings, the music then kicked off and she quickly changed into a turquoise dress within seconds.

The song changed and within seconds again she changed into a silver dress. The silver dress had metallic panels that magically fell off to reveal a black outfit. She then changed into another three outfits without hiding behind any curtains or cloths. Just pure magic.

ALSO READ: America’s Got Talent: Limpopo’s Ndlovu Youth Choir through to the final

At the very beginning Kyle said she was excited to meet Heidi Klum because she is the queen of fashion. The model later gave Kyle the golden buzzer, an honor as each judge may only press their golden buzzer once during the season. The golden buzzer sent Kyle straight into the live shows.

“It was absolutely incredible and flawless. I mean, you know how much I love fashion and I feel like we’ve never really had anyone that is as good as you,” said Heidi Klum.

The crowd went wild and Kyle received a standing ovation from all the judges including Simon Cowell.

“I think normally when you see this kind of act, there’s always two people normally in the act, and the music’s terrible,” said Simon Cowell.

“This was very, very cool and you have amazing showmanship. It was world class,” he added.

“We’ve seen quick-change artists on this show. I’ve never seen one better than you to see the outfit fly in thin air from the hanger to you, it’s magic,” said Howie Mandel.