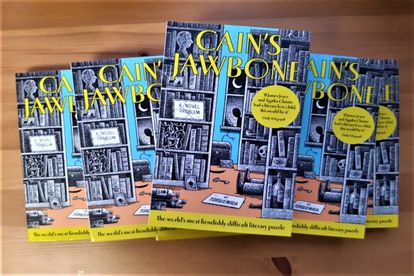 The murder mystery ‘Cain’s Jawbone’ is taking the book world by storm. Image via Twitter @snugbookshop

The murder mystery ‘Cain’s Jawbone’ is taking the book world by storm. Image via Twitter @snugbookshop

Almost a century ago, when Agatha Christie had the world in a murder mystery frenzy, another author — known by his mysterious pen name Torquemada — released an inconspicuous 100-page book, titled Cain’s Jawbone.

Torquemada (real name was Edward Powys Mathers) was a poet and translator, but he was most well known for his almost impossible crosswords. In 1934, Mathers put pen to paper and wrote a story that have managed to keep the world fixated for years to come.

As with most trends these days, Cain’s Jawbone went viral because of TikTok. In a series by TikTokker Sarah Scannell, she attempted to solve the mystery and shared the process with her fans. The posts quickly went viral and this has led to the book selling out across the globe.

On her TikTok, Scannell cut out all the pages and turned her entire room into a murder board. As she pasted the pages all over her walls, Scannell and her viewers were sucked into a mystery that is hailed as the world’s most fiendishly difficult literary puzzle.

INVOLVEMENT OF READER THE MAGIC OF ‘CAIN’S JAWBONE’

Cain’s Jawbone, named after the first murder weapon in history, is made up of six stories spread over 100 pages, each containing one murderer and one victim, but the pages are in the wrong order. It is up to the reader to rearrange the pages to reveal who was killed, by whom and why. Only four people ever have managed to arrange the pages in the right order.

The reader is meant to cut out the 100 pages and rearrange them into the apparent right order. There are over 30 million possible combinations that the pages can be arranged in. Because of this, maths and probability won’t help you catch the killers.

The reader has to carefully scan for clues hidden in the pages while painstakingly working through Mathers’s word games, puns, spoonerisms and literary illusions, making this mystery the ultimate challenge.

ACTOR JOHN FINNEMORE ONE OF FEW TO SOLVE THE PUZZLE

British actor and comedy writer John Finnemore tackled Cain’s Jawbone and became the only person in the 21st century who has solved the puzzle so far.

Finnemore stated that lockdown was the driving factor of him sinking his teeth into this literary challenge. It took him four months and he described the mystery as “extremely difficult” yet “very well designed”. The puzzle continually unfolds, sometimes revealing more questions than answers. Finnemore persevered though, and he finally cracked the case.

In order to check if you have in fact actually solved the mysteries, you have to write a letter or email to the Laurence Sterne Trust, who have kept the answer under lock and key for decades.

This puzzle is not for the fainthearted and, miraculously, the answer is not available online. So, only one question remains, have you got what it takes?

Cain’s Jawbone is published by Unbound and is available at Exclusive Books stores for R234.