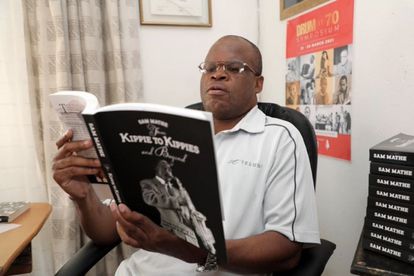 Sam Mathe’s book ‘From Kippie to Kippies And Beyond’ takes a deep dive into generations of South African jazz artists. Image via Twitter @SABreakingNews

Sam Mathe’s book ‘From Kippie to Kippies And Beyond’ takes a deep dive into generations of South African jazz artists. Image via Twitter @SABreakingNews

One of apartheid’s most damaging consequences was the silencing of Black artists, which resulted in a loss of their histories, among so many things.

As many documentors of culture know, when artists die, their stories and oral histories go with them.

To go back now and piece together these histories is an arduous task for any researcher, but journalist and author Sam Mathe has tried to achieve this in his new book, From Kippie to Kippies and Beyond.

It is a tribute to hundreds of South African musicians who are a forgotten memory as well as the younger generation currently performing.

Stretching back over four generations of musicians from the the1920s to the present, it paints intimate biographical portraits of jazz, folk and pop artists.

The book charts new territory as a collection of just more than 300 mini-biographies, with the oldest artist being saxophonist Peter Rezant (born in 1902) and the youngest the singer Zoë Modiga (born in 1994).

Each entry is presented with the musician’s background and music career and a short discography at the end. There are no photographs. It can be used as an encyclopaedia, a reference book or even a “rough guide” to jazz.

The first edition is labelled Volume 1 and Mathe is already working on the second volume.

HOW SAM MATHE WENT ABOUT HIS RESEARCH

For his research, he sought out either the musicians themselves or the people most pivotal in their lives, particularly family members who could help him complete their stories.

Sometimes he would visit tombstones for accuracy of dates, or ensure that he tracked down and fact-checked the details.

He built on material from books already published and used his own articles as reference material too.

The title draws inspiration from clarinettist and alto saxophonist Kippie “Morolong” Moeketsi, whom Mathe considers to be “the father of South African jazz and its symbolic representation”.

Born in 1925, Moeketsi was a legend not only for his musicianship but also for being a mentor to many artists.

Though an icon, Moeketsi’s musical contribution has gone largely unrecognised save for a few examples such as the legendary former jazz club Kippies, which stood near the Market Theatre in Newtown.

A statue of Moeketsi outside the venue was unveiled in 2009. The Cape Town International Jazz Festival also named one of its largest stages after him.

SAM MATHE WORKED HARD TO GET THIS BOOK PUBLISHED

One of Mathe’s first music articles was about Moeketsi, written for Pace magazine in 1994.

He already had the idea for the book then, but he was still a rookie journalist and needed more experience in the field. While working at the weekend tabloid Sunday Sun in 2005, he found that he had extra time on his hands and committed to starting research for the book.

His initial interest was profiling the older generation, but in the end he found that he couldn’t ignore new-era talents such as Sisonke Xonti, Thandi Ntuli, Kyle Shepherd, Shane Cooper and Bokani Dyer.

“We have a very rich jazz heritage as a nation, but we are still having quite exceptional talents among the current musicians,” says Mathe.

“They represent the same tradition of performers who started with people like Kippie Moeketsi and therefore they deserve to be documented as well for posterity.”

Mathe ran into various funding issues and frustrations from the Department of Sport, Arts and Culture and the National Arts Council while trying to complete the project.

As a result, the book is largely self-funded with a bit of help from the Academic and Non-Fiction Authors’ Association of South Africa and the Norwegian embassy.

At first, Mathe did not think of self-publishing, but when no publishing house showed interest he approached Robert McLaren of Themba Books, who agreed to a co-publishing deal.

Mathe attributes his love for storytelling to his family.

“I was born into a family of storytellers. My grandmother was a great storyteller of folk tales.”

When television was introduced in 1976, he says, it was for white people and “at that stage I believed that my grandma’s stories were the best thing that no small box could rival”.

He describes himself as an avid reader since he was young and the book is dedicated to his parents, who introduced him “to the pleasures of reading and the importance of education”.

WHERE IT ALL STARTED FOR SAM MATHE

The author’s love for music was cultivated by the jazz he remembers hearing on the radio as a child.

“Somehow this music caught my attention and I became curious,” he says.

“I was still in my pre-teens in the 1970s when I first heard Kippie Moeketsi on radio. It was either Umgababa, Stop and Start or Tshona!.

“Weekend parties known as gumba-gumbas were organised around a vinyl spinner called a ‘space-gram’ [a radiogram with a turntable]. Gumba-gumba also referred to the sound system itself.”

“The vinyl records were mainly available in 45s. I first saw an LP in the next decade when hi-fis were becoming part of the furniture in a number of African households.”

Later, at university, he frequented music shops like Kohinoor World of Music in Johannesburg and started collecting cassettes.

Mathe ended up covering music by choice because, he says, he loves music in general and South African music in particular.

He was inspired by Drum writers of the 1950s like Can Themba, Bloke Modisane, Casey Motsisi and Arthur Maimane.

“When I discovered Es’kia Mphahlele, and later the other Drum writers, it became possible for me to nurture a dream of being a writer. To know that there were writers of their calibre in South African literature and journalism was a big deal for me. They inspired me to follow in their footsteps.”

He always wanted to become a journalist and was first published in 1987 as a student at the University of the Witwatersrand.

These days he wears many hats as a writer, poet, researcher, editor, publisher and social historian, and he is keeping busy with other book projects, including one on poetry.

In From Kippie to Kippies and Beyond’s introduction, Mathe describes it as a “venture that aims to reclaim this brilliant but woefully neglected heritage”.

He is, of course, referring to the largely undocumented history of South African jazz and lamenting the lack of biographies or memoirs.

Importantly, too, he adds that in 2021 alone artists Sibongile Khumalo, Tshepo Tshola, Steve Kekana, Andre Petersen and Lawrence Matshiza all passed away. To his credit, he was able to speak to many significant musicians before they died, among them saxophonist Robbie Jansen.

Part of apartheid’s legacy is that many Black artists died in obscurity. There was a disregard for musicians and their identities, with little attention and respect given to their lives.

It is a near-impossible task verifying all the information in Mathe’s book owing to the lack of documentation, so much of it relies on memory.

Despite jazz in South Africa having deep roots tied to Black social and political history, there are only a handful of books published about it.

This leaves gaps in the history and knowledge of jazz and there is so much work yet to be done. Mathe’s book is important for filling some of those gaps, but it can also be used as a launchpad for further research.

It is an immense work that allows Black South Africans to begin the work of restoring their cultural history.

From Kippie to Kippies and Beyond is available on Amazon.