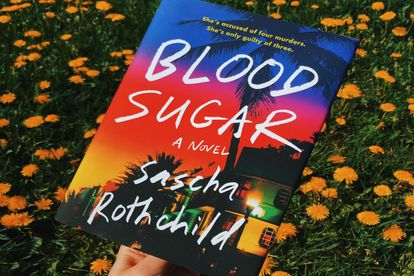 Even though Sascha Rothchild is no stranger to the world of writing, her debut novel shows that she is indeed a master across genres.

When it comes to screenwriting, Rothchild has more than proved herself as she has been nominated for an Emmy, a Golden Globe, and a Writer’s Guild Award over the course of her career. More recently though, she decided to expanded her writing into the world of fiction.

With her debut novel, a psychological thriller titled Blood Sugar, Rothchild takes the reader into the mind of the murderer in a unique and irresistible story.

With tense writing, an intriguing timeline, and unforgettable characters, Blood Sugar is a must-read!

‘BLOOD SUGAR’ IS A DELICIOUSLY DARK TAKE ON PERSPECTIVE

Blood Sugar is written from the perspective of Ruby, a murderer. This is made clear in the blurb and the reader knows that this is not a whodunnit story but rather a “why-did-they-do-it”. Rothchild expertly builds tension in a story where you know who the murderer was from the first page but you want to read on.

The main character of Ruby presents the reader with a conundrum: you cannot help but love Ruby but what about the fact that she is a murderer? You will just have to make up your own mind on this matter when you read the book.

Not only is the storyline unique, but Rothchild also manages to tenderly explores dark topics like grief, love, betrayal and revenge. Blood Sugar is a wonderfully complex novel that will have you hooked from the first page.

Also read: ‘One of Us Is Lying’: Viral murder mystery the perfect Youth Month read

Ruby is accused of four murders, but she’s only guilty of three…

When she was a child growing up in Miami, Ruby saw a boy from her school struggling against the ocean waves. Instead of helping him, Ruby dove under the water and held his ankle down until he drowned. She waited to feel guilty for it, but she never did.

And so, the bodies start to stack up. Twenty-five years later, Ruby’s in an interrogation room under suspicion of murder, being shown four photographs. Each is a person she once knew, now deceased. She is responsible for three of the four deaths… but it might be the crime that she didn’t commit that will finally ensnare her.

From the Emmy-nominated writer of The Bold Type, this darkly funny and compulsively page-turning novel is perfect for fans of Caroline Kepnes’ You and Oyinkan Braithwaite’s My Sister the Serial Killer.

Sascha Rothchild grew up in Miami Beach but moved to Boston where she majored in playwriting at Boston College. She eventually moved to LA to pursue a career as a writer.

Rothchild has penned numerous personal essays that were published in LA Weekly as well as a comedic memoir titled How to Get Divorced by 30. She has written for and produced shows such as The Bold Type, The Babysitters-Club and the Carrie Diaries.

Blood Sugar is her first novel and hopefully not her last.

Blood Sugar has been published by Trapeze and is available at Exclusive Books stores for R386.