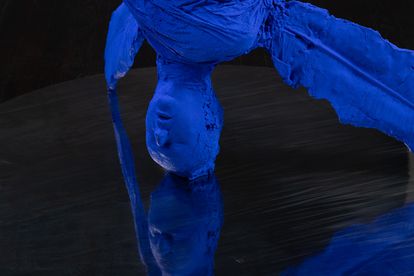 Ultimately with every art show, they improve the fortunes of generations of African origin artists. Here’s a collection lighting the way right now.

INTO THE LIGHT |  SA PAVILION AT THE VENICE BIENNALE

Last week saw the opening of South Africa’s National Pavilion, titled ‘Into the Light.’ The theme of the show investigates the psychic spaces we’ve all experienced in the pandemic. Whilst eponymously a celebration of re-emergence and revelation, it also investigates whether isolation can be a constructive moment in the creative journeys of artists; a time for distillation, purification and internal evaluation.

Lebohang Kganye’s work explores themes of personal history and ancestry whilst resonating with the history of South Africa and apartheid. Kganye’s exhibits for the Biennale are drawn from her 2011 photographic print collection ‘B(l)ack to Fairy Tales.’ For this collection, she re-imagines and portrays herself as ‘Snow Black’ in staged cameos from the fairy tales she loved as a child, set in an African township.

Phumulani Ntuli’s journey of self-investigation is an exploration of the psyche. His works blend reality, fantasy, science fiction, the dystopia of our past and the dream of a hopeful Black future. Ntuli’s exhibit features an eclectic mix of stop-motion animation videos and collages on canvas. A centrepiece will be his stop-motion animation film ‘Godide’, in which Ntuli presents himself as an intrepid explorer, symbolically shedding his traditional African attire (and thereby his African identity) before diving below paper cut-out waves to enter an imaginary realm.

Roger Ballen is a world-renowned photographic artist with his own distinctive aesthetic known as ‘Ballenesque,’ which integrates film, installation, theatre, sculpture, painting and drawing. His exhibition showcases images from his 2016 book ‘The Theatre of the Apparitions.’ This project was inspired by Ballen observing the crude etchings which former inmates of an abandoned women’s prison had created by scraping off the paint used to blacken the windows of the facility. The installation transports the viewer into a spiritual fantasy realm of haunting images, in which fossilised facial forms and dismembered figures interact with ghostly shadow forms in bizarre rituals.

BEEZY BAILEY | LET THERE BE LIGHT

Nobody has ever accused Beezy Bailey of being faint-hearted. Nonetheless, we think it’s pretty brave of him to take on a show over two separate venues, in a different country, with over 30 works in each! The two venues? Everard Read’s London gallery in Chelsea and Boughton House, one of Britain’s finest historic homes, part of an 11,000-acre estate in Northamptonshire, famed for its beauty and its exemplary collections.

His new collection of new work continues Bailey’s interest in creating art as a balm for a mad world – a corrective for our most lamentable human qualities, including a planet brutalised by extremes of wealth and poverty, environmental ignorance, and negligence.

Bailey says: “My art seeks to capture this in a transcendental way. I aspire to capture beauty and light in a world that can be so dark. It is against the dark sky that we see stars. In a world where we are slaves to smartphones and computers, we have forgotten so much of our humanity and have become disconnected from the fast-disappearing birds, bees, trees, flowers, fishes and all other wonders of the world.”

Where: Boughton House, Northamptonshire
Details: At Everard London website
When: 16 April – 31 May, 2022.

This month Koop Projects follow their powerful debut with a strong showing in the form of a solo exhibition of new work by the extraordinary Zimbabwean artist, Georgina Maxim. Maxim is one of Zimbabwe’s, and Africa’s, most important voices – visual artist, curator and also co-founder of the art collective Village Unhu. This will be her first solo exhibition in the UK since 2017 with Sulger Buel Gallery in London.

Born 1980 in Harare, Zimbabwe, Georgina Maxim is both an Artist and curator. In 2012, she co-founded Village Unhu, an artist-run space in Harare that provides studio spaces, exhibitions, workshops and residency programs for young and professional artists.

Maxim produces work from cotton and woollen threads and pre-worn items of clothing. The practice of handing down clothing in Zimbabwe is a ritually symbolic gesture and she both plays with and respects these traditions as well as breaking from them with purely abstract forms. The work is colourful and bright but its uniform and abundant stitches and guarded titles hint at a displacement of emotion and finding refuge in the act of making itself.

Georgina was nominated for the Henrike Grohs Award (Goethe Institute, Abidjan) and was awarded first prize in the exhibition Woman at the Top at the National Gallery of Zimbabwe (2014). Her work has been exhibited internationally at Mojo Gallery in Dubai, 31 PROJECT in Paris and Goethe Institute in Salvador de Bahia. In 2019, Georgina Maxim presented an installation for the Zimbabwean pavilion at the 58th Venice Biennale.