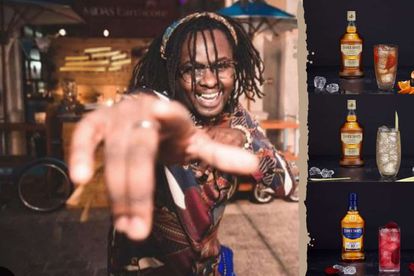 Mzansi mixologist Peter Lebese aka ‘Thee Gintleman’ has mixed up some whisky highballs for the festive season. Two lucky readers who successfully complete The South African’s Whisky Quiz. could be walking away with their very own Three Ships Whisky Highball Mixer Kits. Image via Instagram @theegintleman

Mzansi mixologist Peter Lebese aka ‘Thee Gintleman’ has mixed up some whisky highballs for the festive season. Two lucky readers who successfully complete The South African’s Whisky Quiz. could be walking away with their very own Three Ships Whisky Highball Mixer Kits. Image via Instagram @theegintleman

A whisky highball is as simple to make as it is delicious to drink, which is one of the reasons it’s at the top of the drinks trends list this year. It’s a great drink to serve at home while entertaining friends and family over the festive season, and with the right mixer, your Highball could be the talk of the town.

South Africa’s Three Ships Whisky produces expertly distilled globally awarded whiskies at the James Sedgwick Distillery in Wellington, outside Cape Town — and with a versatile range that appeals to the local palate, it’s the perfect base for delectable highballs.

Two lucky readers who successfully complete our Whisky Quiz at the end of this article, will stand the chance to each win a Three Ships Whisky Highball Mixer Kit valued at R700. And it couldn’t be easier as the quiz consists of only three questions with the answers in a multiple choice format.

Each highball mixer kit will include:

To enter, simply complete the Whisky Quiz at the bottom of the article. The closing date of the competition is 31 December 2020. Winners will be announced on 5 January 2021.

To whet your appetite, the Three Ships Whisky team have created four South African-inspired highball mixers that are simple to make and perfect to try out over the summer holiday season.

Mzansi’s favourite local mixologist Peter Lebese aka #thegintleman of sipexclusive has had a hand in designing these so that they appeal to the South African palate — with each mixer perfectly matched with variants from the Three Ships Whisky core range:

Named Kasi Flame, Lemon Select, Pineapple Slinger, and Timeless 10, these are bound to roll off the tongue as naturally as local lingo like “naartjie” and “samie”.

“The secret to making a world-class whisky highball is using an expertly distilled whisky for your base — and the Three Ships Whisky range meets all the credentials with a versatile range catering to different taste profiles.

“Only an expert can create an award-winning whisky, but with the right mixer, anyone can make the perfect whisky highball.’’

Get into the mix: Four whisky Highball Recipes

Try your hand at one of the summer Highball mixers from Three Ships Whisky. It’s the perfect serve for a sociable sundowner or a refreshing pre-dinner drink – or simply to celebrate with family and friends during the special festive season occasions.

The Three Ships Whisky Select is a high-quality, smooth-tasting blend of the finest malt and grain whiskies, distilled in both pot and column stills that have been left to mature for a minimum of three years. Add fiery ginger ale and naartjie to create the refreshing Kasi Flame Highball.

The Pineapple Slinger Highball is a mouth-watering blend of the Three Ships Whisky Five-Year-Old served with a splash of pineapple-flavoured sparkling water, a slice of pineapple and a sprig of mint– the perfect drink for relaxing on the patio on those hazy summer days.

The Timeless 10 is definitely for you if your palate leans towards the slightly exotic. Served with the Three Ships Whisky 10 Year Old and a splash of soda garnished with thinly sliced beetroot, it’s also bound to impress your guests.

Globally respected Master Distiller Andy Watts is recognised as the pioneer of whisky on the continent, and when many said that producing an exceptional whisky here in South Africa was not possible — with whisky traditionally coming from the cooler Northern Hemisphere countries — he refused to believe it.

He knew that with enough determination, anything is possible – and went on to prove that we can be the exception. He believes that the great spirit of South Africa and all that she represents is what keeps our whisky flowing.

Three Ships Whisky supports responsible drinking.  Alcohol not for sale to persons under the age of 18 years.

D33: Dubai plans to ‘double’ economy in next decade