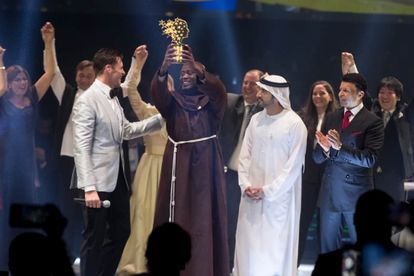 A maths and physics teacher from a secondary school in a remote village in Kenya’s Rift Valley recently won a $1m prize (R14 432 000,00 ) for being the world’s best teacher.

The BBC reports that Peter Tabichi won the 2019 Global Teacher Prize on Saturday in Dubai where Hollywood star Hugh Jackman hosted the ceremony. He was chosen out of 10,000 nominations from teachers in 179 countries.

It’s reported that Tabichi gives away most of his salary to support poorer pupils.

He reportedly gives away 80% of his pay to support pupils who otherwise could not afford uniforms or books.

“It’s not all about money,” said Tabichi, whose pupils are almost all from very disadvantaged families. Many are orphaned or have lost a parent.

The 36-year-old teacher wants to raise aspirations and to promote the cause of science, not just in Kenya but across Africa. On winning the prize, he hailed the potential of Africa’s young population:

“As a teacher working on the front line I have seen the promise of its young people – their curiosity, talent, their intelligence, their belief.

“Africa’s young people will no longer be held back by low expectations. Africa will produce scientists, engineers, entrepreneurs whose names will be one day famous in every corner of the world. And girls will be a huge part of this story.”

According to IOL, the Varkey Foundation, which organises the event and handed out the prize for the fifth time, praised Tabichi’s “dedication, hard work and passionate belief in his students’ talent”.

It said in a statement, “he has led his poorly-resource school in remote rural Kenya to emerge victorious after taking on the country’s best schools in national science competitions”.