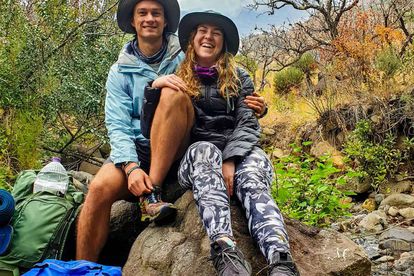 Marek Urban and Sarah Korck have explored South Africa on the tightest of budgets. Here they are in the Drakensberg. Image: Instagram

Marek Urban and Sarah Korck have explored South Africa on the tightest of budgets. Here they are in the Drakensberg. Image: Instagram

Young couple Marek Urban and Sarah Korck left their home in KwaZulu-Natal for a quick trip to the Northern Cape with only one week’s worth of clothing.

But, after visiting the Augrabies Falls National Park and the Kalahari Trails Meerkat Sanctuary in Kuruman, they decided to keep going and explore the rest of the country too, seeing they were already so far from home!

The couple had initially dedicated their year to travelling and working overseas, but when those plans fell through as a result of the Covid-19 pandemic, they jumped at the chance to discover their own country instead.

Their trip, on the tightest of budgets, kicked off as soon as lockdown restrictions between South Africa’s provinces were eased.

On their Youtube video, Korck said they travelled very cheaply, only camping and eating canned foods, and, where possible, staying with people they knew.

Their adventurers took them to various towns, regions and cities around South Africa, from sipping their way through the Cape Winelands and interacting with elephants in Knysna, to visiting the untouched beaches of the Transkei, exploring the Kalahari desert in the Northern Cape and checking out nature reserves all over.

Urban said the pair had an amazing time going through South Africa.

“We had such an incredible experience, just [exploring] all the different landscapes and the people.”

He especially enjoyed meeting so many different people around the country.

“South Africans are such warm-hearted and generous people.”

‘All roads led me to you’: Trip ends in engagement

The cherry on the cake was their last stop, Coffee Bay, where Urban braved the notorious potholes, got down on one knee and proposed to his now fiancée.

The couple have since received their European passports and are excited to continue sharing their travel adventures abroad with their South African audience.

Urban said: “It [felt] like we have earned our right now to do our international travelling overseas.

“It would have felt a bit funny, having gone on international travels, having not experienced our own country.”

The couple’s trip in numbers

Check out the couple’s YouTube video of their tour through the country: