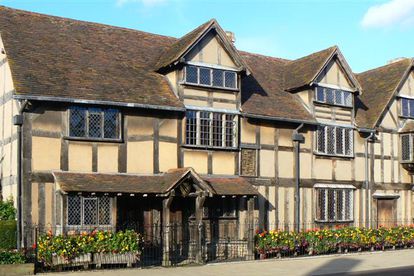 The Yarningale Aqueduct in Stratford-upon-Avon

If Shakespeare were living in Stratford-upon-Avon now he’d probably feel very at home.

He could start his day taking a peaceful stroll on the riverbanks  after having a full English breakfast sitting outside on the green at Carluccio’s, catch a matinee of one of his plays in the Royal Shakespeare Theatre in the afternoon, and end his day with a little bubbly at the theatre’s Rooftop Restaurant whilst surveying all he knew and loved.

And then, the mood being with him, he could write about it all — tragedy or comedy, it wouldn’t matter.

Historic Stratford-upon-Avon, the Warwickshire market town in which he was born, is England at its most picture perfect. With its beautifully preserved streets of Tudor houses and gardens, the unspoilt River Avon dotted with swans, skiffs, cruise boats, the canal with its locks and narrow-boats, the 50p chain ferry, the rolling lawns and gorgeous trees, it’s a great place to escape to.

Of course there are well-defined traces of the life of Shakespeare (1564 – 1616), like his birthplace: a large house on Henley Street which his father, John, a glove-maker and mayor of Stratford knocked together from two adjacent houses. You can also check out the grammar school which, speculatively, he attended on the corner of Church Street and Chapel Lane. Then there’s the big house he acquired for his family, New Place on Chapel Street, bought when he had made good money acting and writing plays. (He wrote, disputedly, 38 plays in all.)

The house on Henley Street, believed to be Shakespeare’s birthplace

His mother’s family farm, Mary Arden’s Farm, is nearby and is run as a working Tudor farm where you can have a go at archery and falconry. The thatched cottage of his wife Anne Hathaway, the daughter of a local farmer, still stands in the village of Shottery about a mile out of Stratford.

Perhaps the most fascinating venue of all is the elegant Holy Trinity Church, which is about a 15 minute walk from the Old Town. Dating back to 1210 and with elaborate stained glass windows, it has Shakespeare’s grave (he’s buried with Anne) and in the annals his birth details are noted in Latin and his death is marked down in English. A mark of the changing times!

Stratford, once an important Elizabethan river-crossing settlement, is one of those small, gem-like places for a perfect weekend or even a day trip. You can check out an afternoon play in the Royal Shakespeare Theatre or the smaller Swan Theatre adjoining it. There are plenty of things to do and  celebrations and events throughout the year.