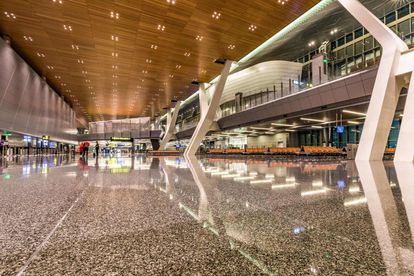 The flight was from Hamad International Airport, above, in Doha to OR Tambo in Johannesburg. Image: Adobe Stock

The flight was from Hamad International Airport, above, in Doha to OR Tambo in Johannesburg. Image: Adobe Stock

After three years of having to make long diversions with added flying times for most flights in its network, Qatar Airways is now able to able to offer shorter flights, since it will be flying more direct routes to the destinations it serves.

The move is good news for the airline and passengers all over the world.

The breakthrough came on 5 January, when Qatar signed an agreement with neighbouring states, effectively ending the historic stand-off between this country and other Arab nations. Qatar Airways quickly amended its flight schedules to reduce flying times and the extra fuel burn it endured for more than three years as a result of having been forced to make long diversions.

Qatar Airways had been taking long diversions to almost every destination in its route network for three years as a result of the blockade by neighbouring states who accused the oil-rich nation of supporting terrorism.

In June 2017, Saudi Arabia, the United Arab Emirates, Bahrain and Egypt implemented the blockade against Qatar, claiming the country had unusually “close” ties with the Republic of Iran.

Qatar denied the claims and refused to end relations with Iran, leading to the severing of diplomatic and economic ties between Qatar and other Arab nations. The soured relations between states led to a land, sea and air blockade against Qatar.

The blockade affected Qatar Airways’ flights. The airline had to divert many of its flightpaths since it was not able to fly directly to its hub in Doha. Qatar Airways was forced to reschedule most flights across its route network. This meant passengers had to endure overall longer flying times.

The airline tried to make up for the inconvenience by upping its service levels and improving the overall passenger experience. Qatar Airways began offering complimentary stopover packages for passengers inconvenienced by long transit and flight connection times.

In an unprecedented move, the state of Qatar also dropped visa requirements for South Africans and many other nationalities that previously needed visas for entry to Qatar. This helped Qatar and its national airline gain favour with many travellers since many countries in the Middle East still require visas of South Africans.

The award winning five-star Qatar Airways is a popular choice with many international travellers since it offers a wide global network, excellent service and competitive airfares for passengers willing to fly via Doha.

Neighbour shot dead during dispute over loud music in KZN