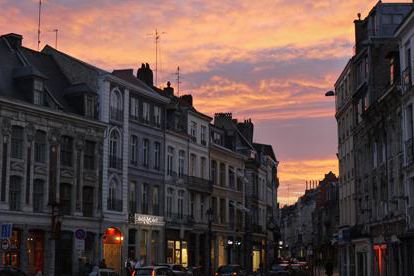 Lille is lively, the food is great and they have a pretty interesting selection of things to drink.

Apart from that, since it was Europe’s Capital of Culture in 2004 when it was radically spruced up, it is one of the best-looking cities in Europe. There is absolutely no reason not to take the train to Lille for lunch. Travel time from London to Lille by Eurostar is less than an hour and a half, you don’t have to go via Paris, and you can walk from the station to the middle of this extraordinary city in French Flanders, so close to Belgium that with a push it could be in Belgian Flanders.

But go for longer than just lunch, which probably would have to be moules-frites and a glass of local beer in the Grand’ Place, a magnificent square encircled by elegant buildings and gracious shops. (Pause between moules to glance up to the facade of the Old Bourse to notice the black dots around the windows near the roof. Not high-flung graffiti but Austrian cannonballs lodged in the facade.) There is plenty to see in Lille. The old Flemish quarter is absolutely alive with cobbled alleys filled with bars and boutiques, music, fashion and ‘gaufres’ (waffles) you buy in the street. The local cheese, maroilles, you can smell a few blocks away and being so close to the coast the fish is excellent, so fresh it jumps off the plate — literally.

Over a dinner at the art deco fish restaurant La Paix in Place Rihour, I attacked my dorade (sea bream) so enthusiastically that its head leapt from my plate and flew to the floor several yards away. The waiters, clearly being used to this, without so much as a raised eyebrow scooped it and secreted it out of sight before I had a chance to blush. There are also lovely, classical avenues of imposing buildings and lots of oddities like a museum in a former art deco swimming pool, La Piscine in Roubaix and Charles de Gaulle’s 1890 birthplace in rue du Faubourg Saint Martin, now a museum.

And, of course, from August 31st to September 1st, the city becomes home to the largest flea market in Europe. A hundred kilometres of Lille pavement are covered by stalls selling everything from antiques to anchovies and up to a million people descend on the city. It’s a market that has been going since the Middle Ages when valets had the right to sell their masters’ unwanted clothes and so on once a year.

Lille, although it is the fourth largest city in France, is quite contained which makes for pleasant strolling. It has a population of almost 1.10 million and its foundations go back to 640, mentioned in the legend of Lyderic and Phinaert as L’Isle (for ‘the island’) as it was once marshy. It was invaded by the usual gangs of Vikings, Normans and Magyar, and became renowned for its cloth in the 12th century. As the textile industry boomed and coal mines thrived, Lille grew in wealth. Its style and dignity is still very much there. Isolated off the tourist track, Lille is a bit of a dream city and les Lillois are super-cool. It’d be a real waste to go there just for lunch.

Daily devotion: Your bible verse and prayer for 14 January 2023