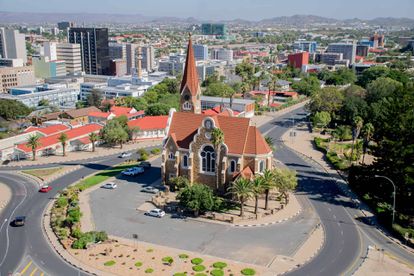 Windhoek is the city of many faces. Image via Pixabay

Windhoek is the city of many faces. Image via Pixabay

The capital city of Windhoek is often overlooked by travellers in their rush to Namibia’s dunes and game parks, but the bustling, lively metropolis has much to offer in the way of a walkable game reserve, a vibrant township culture, and a laid-back, yet distinctly German feel.

This modern, well-groomed city is a fantastic spot to begin or end a journey into Namibia’s stark hinterland, but it also offers a great variety of cultural sights, outdoor activities, excellent restaurants, and some good shopping. Its African urban buzz gives the city an edge that will have you wanting to spend a few days exploring.

With FlySafair hoping to launch new international routes, including between Johannesburg and Windhoek, here are some of the best things to see and do in this city of many faces.

What to do in Windhoek

Located in the Old Breweries Complex, the Namibia Craft Centre is a vibrant, bustling market where you can find all sorts of handmade and locally crafted gifts and souvenirs.

The covered market features a cornucopia of colourful stalls that showcase handmade works from artists and artisans living in the country’s most remote areas. You’ll find traditional Namibian crafts such as copper and ostrich eggshell jewellery, handcrafted woodworks, and beautiful paintings.

Stop off at the popular Craft Café for a typical Namibian breakfast or lunch.

Just south of the city is the sprawling Heroes’ Acre war memorial — a famous landmark that celebrates Namibia’s 1990 independence. The monument, which, bizarrely, was designed by North Korea, features an imposing statue standing on sanctified ground. The statue represents all those who died in the struggle for independence against colonial rule.

The Alte Feste is an old German fortress that is another iconic landmark dedicated to the independence of Namibia.

The fortress, which is now the oldest building in the city, once garrisoned the country’s first German colonial troops. It now serves as a museum and is a good place to visit to learn more about the rich history of Windhoek and Namibia.

Small, peaceful, and beautifully manicured, the Parliament Gardens are a great place for a quiet stroll or a picnic. The park is pristine – Windhoek is considered one of the cleanest cities in Africa – and boasts lush vegetation, plenty of shade and places to sit, and is home to Namibia’s first post-independence monument. Perfect for picnic lunches.

Situated in the picturesque hills of the Khomas Hochland, just a short drive from the city, the Daan Viljoen Game Reserve offers an opportunity to see an array of indigenous mammals and bird species without the hassle of a full safari.

It might be the smallest game reserve in Namibia but is home to a wealth of animals and makes for a fun day trip. Pack a picnic and head into the Khomas Hochland hills to see if you can spot blue wildebeest, springbok, Hartmann’s mountain zebra, kudu, eland, gemsbok, red hartebeest, and impala.

Namibia’s sunsets are nothing short of spectacular and one of the best spots to enjoy them is from the Three Circles lookout point above the city.

It’s a bit of a climb to get to the three stone slabs on Lover’s Hill, but the panoramic views are worth the effort. Grab some locally made Windhoek lager from Namibian Breweries and head up there at the end of the day to watch the sun take a bow and slip over the rim of Africa.