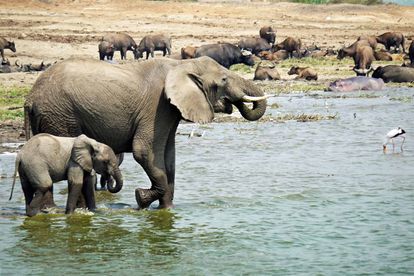 In this latest animal sighting, an elephant is wallowing in a waterhole and does not want to share it with a resident hippo! Image: Pixabay

In this latest animal sighting, an elephant is wallowing in a waterhole and does not want to share it with a resident hippo! Image: Pixabay

With many hurdles to jump through for any holiday in another country, here’s one trip you can put on our bucket list in the meantime: A wildlife safari with a difference.

Blessed with a rich diversity of flora and fauna, Malawi is home to rolling grasslands, massive plains and shimmering waterways that support large varieties of wildlife in vast, unspoilt areas of untamed wilderness.

Its grasslands support large varieties of antelope, while dense woodlands offer cover for sable, roan and eland. Herds of elephant, buffalo and zebra abound, black rhino have recently been successfully re-introduced, and thousands of hippo and crocodile command the waterways.

Nestled in the heart of central Malawi, and considered to be one of its last remaining unexploited natural habitats, the Nkhotakota Wildlife Reserve is one of the country’s most beautiful regions.

Covering more than 1,800km2 of rugged terrain made up mostly of miombo woodland, the reserve is crisscrossed by several rivers which make their way down the edge of the escarpment towards Lake Malawi, creating a lush wilderness for a variety of fauna and flora.

The Bua River meanders through the reserve and offers visitors a wide range of activities to enjoy, such as fishing, canoeing and walking safaris along its banks, where game is often spotted.

Safari activities in the reserve aim to be environmentally friendly and as footprint-free as possible, so don’t expect motorised boat trips and 4×4 vehicle game drives.

It’s all about enjoying the tranquility of the natural surroundings and being able to observe the natural behaviour of wildlife without any disturbances.

Where to stay at this Malawi gem

A range of safari activities can be organised by the lodges and their remote location in the heart of this incredible region promises a truly unforgettable African safari experience.

The region has three distinct seasons and the best time to visit is the dry season from April to October, as it is easier to spot game during the dry period. The region’s seasons are:

The rainy season (November to March)

During the rainy season during there are spectacular storms off Lake Malawi and the escarpment. Temperatures are typically hot and wet, and the humidity peaks during January and February. The bush is a lot thicker at this time and so it can be difficult to spot game.

However, Nkhotakota comes to life with many plants flowering over this period. Most of the mammals have young, providing some lovely game viewing, and migratory birds move through the area.

The turbulent flow of the rivers in the park provides a mesmerising spectacle for those who want to relax in a beautiful setting.

The shoulder season (April to August)

The rains begin to end in April, and by May temperatures are cool in the morning, particularly along the rivers and in higher areas of the reserve. During this time of year, be sure to bring along some warm clothes.

The vegetation is still lush and many species of animals are active all day.  This is the ideal time of year to go up Chipata Mountain, as the temperatures are cool and the views at their best until late June.

The dry season (September to October)

This is the hottest time of the year and many visitors choose to combine time in the park with visits to Lake Malawi nearby for some watersport or time at the beach.

This period provides some of the best game viewing as the vegetation is thin and mammals are drawn to water points.