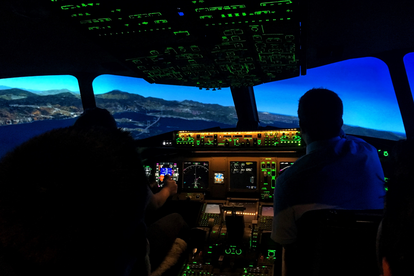 The COVID-19 pandemic has impacted almost all areas of life but certain sectors such as tourism and aviation have been hit hard over the past two years.

From enhanced health and safety measures during flight procedures to wearing masks throughout flights and bans on onboard consumption, passengers have seen many adjustments over the past year in air travel.

Early next year, even more changes could impact air travel in the United States. These changes however have nothing to do with the coronavirus.  It all comes down to the next-generation cellular technology supported by the latest smartphones: 5G.

Transportation regulators in the US are concerned that a version of 5G that will be switched on in January, could interfere with some aircraft instruments. Many aviation groups share these fears — despite reassurances from the federal telecom regulators and wireless service providers.

The Federal Aviation Administration (FAA) which regulates all aspects of civil aviation in the US, is concerned that 5G service antennas near some airports could throw off readings from aircraft equipment that is designed to tell pilots how far they are from the ground.

These systems, known as radar altimeters, are used throughout a flight and are considered critical equipment. Radar altimeters differ from standard altimeters, which rely on air pressure readings and do not use radio signals to gauge altitude.

RESTRICTED LANDINGS AT SOME AIRPORTS

CNN says that the FAA issued an urgent order forbidding pilots from using the potentially affected altimeters around airports where low-visibility conditions would otherwise require them.

This new rule could prevent aircraft from flying to some airports in certain circumstances because pilots would be unable to land using instruments alone.

It’s not yet known which airports this ruling may affect. When it rolled out the order, the FAA said the exact airports would be specified once it had more information from wireless service providers regarding locations where new 5G infrastructure would be placed.

On 5 January 2022, wireless service providers are expected to activate 5G services that rely on radio frequencies in parts of the United States. This has concerned aviation authorities in the USA.

According to a service map by the United States Federal Communications Commission, parts of California, Florida, New England, Texas and the midwest will gain the new 5G coverage.

Aviation groups warn that this could impact some of the nation’s largest airports, including in Los Angeles, New York and Houston.

South African Airways which operated scheduled flights to New York prior to entering business rescue process in December 2019 has not relaunched any intercontinental routes as yet.