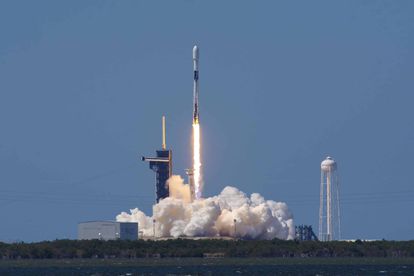 A fairing half supporting this mission previously supported Starlink missions in May 2019 and March 2020. Image via Twitter: @SpaceX

A fairing half supporting this mission previously supported Starlink missions in May 2019 and March 2020. Image via Twitter: @SpaceX

SpaceX confirmed that it would be targeting 7 April 2021 for Falcon 9 to launch the next batch of 60 Starlink satellites from the Kennedy Space Center Launch Complex in Florida, the United States.

SpaceX explained the upcoming Starlink launch has a backup window of Thursday, 8 April, at 12:12 EDT (18:12 South African Standard Time SAST), should anything go wrong during the preliminary tests.

The company also confirmed that the Falcon 9 first stage rocket booster used for this mission previously supported the launch of NASA astronauts Bob Behnken and Doug Hurley to the International Space Station.

It was again used during the ANASIS-II, CRS-21, Transporter-1, as well as two Starlink missions.

“Following stage separation, SpaceX will land Falcon 9’s first stage on the “Of Course I Still Love You” drone ship, which will be located in the Atlantic Ocean”.

SpaceX confirmed on Twitter that the team would be targeting 12:34 EDT (Eastern Daylight Time) for the launch of the 24th batch atop the Falcon 9 rocket.

SpaceX has two more launches planned for April – the 25th and 26th launches – but the dates are yet to be determined.

If you’ve made it this far but you still have no idea what SpaceX’s Starlink Programme is, it’s Elon Musk’s answer to global Internet connectivity. What’s more, the system works, too!

Musk, who is also not one to hide his excitement about the cool things his company can do, tweeted in October 2019 that he was trying to post a message using the Starlink satellites. Minutes later, he added:

Musk had posted the message on Twitter while connected to the Starlink constellation. It connected successfully, despite SpaceX only having deployed a fraction of the satellites at the time.