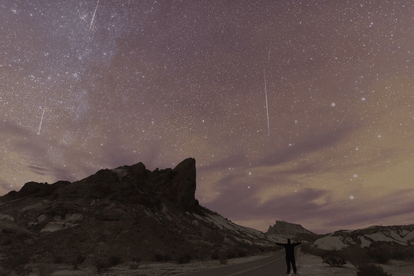 The Orionid meteor shower is active from around the start of October to the start of November every year. A few Orionids may appear as early 6 October, and a lingering straggler or two could still be visible as late as 7 November.

Here’s how to see the meteor shower and when it peaks.

Orionid Meteor Shower – What you need to know

Yes, NASA assures us that the Orionids are visible from both the Northern and Southern hemispheres. This year, the shower will pick up intensity from around midnight and will peak at 7:35 on Wednesday morning.

However, the Bronberg Weather Station points out that additional streaks will also be visible on Wednesday evening as the Earth moves through the comet’s dust cloud.

How to view the Orionid meteor shower

You don’t even need any special equipment or a lot of skills to view a meteor shower; all you really need is a clear sky and lots of patience! And if you can’t view it in person, tune into the live stream below.

The American Meteor Society’s (AMS) stream went live at 18:15 South African Standard Time (SAST). According to AMS, they are currently testing the stream (as it is still daylight in the States).

[We] plan to have a live steam tonight for the Orionid Meteor Shower. The locations rotate every couple of minutes. [Each] place is listed in the bottom left corner [of the stream]. We are currently enabling more stations for the stream”.

What are the Orionids?

According to Nasa, the Orionids are leftover particles from Halley’s Comet and other broken asteroids. When they pass by our sun, the dust they emit “gradually spreads into a dusty trail around their orbits”.

When Earth passes through their orbit, those trails collide with our atmosphere and create the colourful streaks we generally refer to as ‘shooting stars’. It can produce up to 15 visible meteors an hour.

“Each time that Halley returns to the inner solar system its nucleus sheds ice and rocky dust into space. The dust grains eventually become the Orionids in October and the Eta Aquarids in May if they collide with Earth’s atmosphere.”

We are in for a wild ride, with both the Northern and Southern Taurids peaking on 6 November 2020. These will be minor meteor showers, averaging between four to seven streaks per hour.

The Leonids, another “reliable meteor shower” will be visible from the southern hemisphere when it peaks on 17 November, averaging approximately 15 streaks per hour, followed by the Alpha Monocerotids on 21 November.

You’ll want to mark 13 December on your calendars. That’s when the Geminid Meteor shower peaks at 22:52 with a whopping 120 meteor streaks per hour.