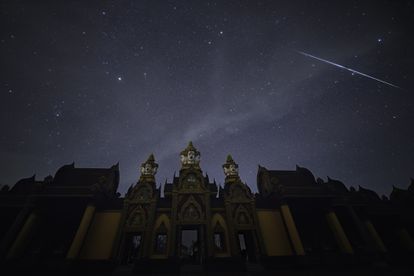 The Leonid meteor shower (also known as the Leonids) is the second shower for November, following the Taurids. This year, the Taurids meteor was barely visible, averaging less than four streaks per hour.

“[The Leonids] are very fast and very bright with most leaving trains. You should be able to see 15 streaks an hour or more during the peak. The Leonids meteor shower is active from 6 to 30 November with fewer activity either side of the peak time”.

What are the Leonids?

According to the Bronberg Weather Station in Pretoria, the Leonid meteor shower originates from dust grains ejected by Comet 55P, also known as the Tempel-Tuttle comet.

Tempel-Tuttte gets its name from the Leo constellation and passes by Earth every 33 years since it was first observed in 902 AD. While we wait for the comet to appear again, we get to see the particles it leaves behind.

The Leonid meteor shower is the brightest whenever the comet passes by Earth, last visiting us in 1998. That means we’ll have to wait until 2031 for a decent fireworks display.

Every year starting 6 November, Earth passes through those particles or dust grains. When that happens, we observe it as meteor streaks in the night sky.

Is the Leonid meteor shower visible from South Africa?

Yes, NASA guarantees that the Leonids are visible from both the Northern and Southern hemispheres. This year, Earth will be passing through the densest streams around 17:10 SAST on 17 November.

However, the best time to view the Leonid meteor shower, according to Bronberg, is from 3:00 onwards, on Wednesday, 18 November. If you’re not a night owl, remember to set that alarm!

It might not be visible across all of South Africa tonight, and that mostly depends on cloud coverage. There’s also the waning gibbous moon which is set to light up the predawn night sky.

“[The Leonid meteor streams] ordinarily pick up steam after midnight and display the greatest meteor numbers just before dawn”.

How to view the Leonid meteor shower

All you have to do is find a nice, dark spot away from light pollution, lie flat on your back if possible, and look up in the northeast direction. Take in as much of the sky as you can.

Do note that the Leo constellation does not come fully into view until after midnight, so heading out too early might end up being a disappointment.

You won’t need expensive equipment either. Just a dark sky and patience. Your eyes will need about 20 to 30 minutes do adjust to the dark.

The best viewing opportunity is tonight after midnight when the constellation Leo rises above the eastern horizon. Leonids can be viewed any place on Earth except Antarctica — given the sky is clear.

There’s a minor shower coming up on 21 November 2020, known as the alpha Monocerotids meteor shower which originates from the Monoceros constellation.

The peak happens around noon (yes, during daylight hours) and we aren’t guaranteed more than four streaks per hour, though. That said, you would definitely want to mark 13 December 2020 on your calendar.

That’s when the next big meteor shower takes place, the Geminids. As we pass through Asteroid 3200 Phaethon’s debris field shortly before 23:00, we could see up to 120 streaks per hour.