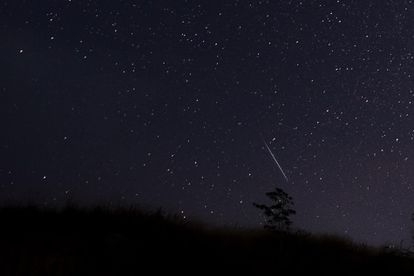 This photo taken late 14 December 2018 with a long time exposure shows a meteor streaking through the night sky over Myanmar during the Geminid meteor shower seen from Wundwin township near Mandalay city. Photo: AFP/Ye Aung Thu

This photo taken late 14 December 2018 with a long time exposure shows a meteor streaking through the night sky over Myanmar during the Geminid meteor shower seen from Wundwin township near Mandalay city. Photo: AFP/Ye Aung Thu

The Geminid meteor shower – or just Geminids, for short – is active from 4 December to 17 December 2020, with fewer activity either side of the peak time.

If you’re in South Africa, the Geminid meteor shower peaks during the evening hours of Sunday, 13 December. You could see up to 120 streaks per hour if the weather permits. Or, 30 to 40 if you are in the city.

Yes, the Geminids are visible from South Africa. But if you miss it tonight, you’d still be able to see some of it on Monday and Tuesday evening as well.

The peak time for South Africa is 22:52 on Sunday, 13 December when Earth moves through the center of the dust trail left behind by the asteroid, as per the Bronberg Weather Station in Pretoria.

The radiant lies at RA 07h 28m, +33° 50′, near Castor (alpha Geminorum). An interactive map is available on TimeAndDate. During meteor activity, toggle the ‘live’ button for real-time data.

How to view the Geminid meteor shower

While South Africans are in a prime position to view the Geminid meteor shower, do note that the visibility of the Geminds – or any meteor shower, for that matter – depends on several factors.

These include geographic coordinates of observer and elevation; time of the day, city light pollution, the weather and terrain. Find a nice, dark spot, lie flat on your back if possible.

Then, look up in the north north-east direction towards the constellation of Gemini.

Your eyes will need about 30 minutes do adjust to the dark. According to NASA, stargazes would be able to see up to 100 or 120 streaks per hour in perfect viewing conditions.

“Folks in suburbs will see fewer, 30 to 40 per hour depending on the lighting conditions. And those downtown in major cities will see practically nothing – even though the Geminids are rich in beautiful green fireballs, [city lights] will blot even them out. Dark clear skies are the most important ingredient in observing meteor showers.

NASA explains that some of a comet’s icy surface burns off as it gets closer to the sun, releasing particles of dust and rock.