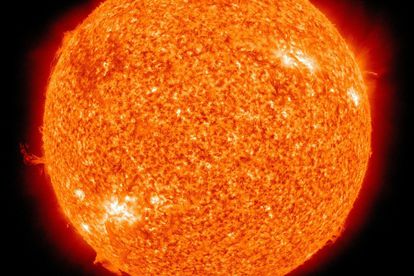 The South African National Space Agency (SANSA) has warned that a ‘solar flare event’ could disrupt communications and mess with satellite positioning systems this week. A G2 storm has been caused by an eruption on the sun, which is set to alter the geomagnetic conditions above Earth.

SANSA, based in the town of Hermanus, Western Cape, issued an alert via a written statement on Tuesday. Things like GPS operations and radio communication between planes and air traffic controllers are left vulnerable to this type of solar activity, and it’s understood that ‘moderate disruptions’ are now presenting themselves across the world:

“An eruption on the Sun a few days ago produced a Coronal Mass Ejection that is now showing its effects on the Earth’s magnetic field.  Magnetometer readings around the world are showing moderate disruptions.  A disturbance of this size is a G2 storm on the NOAA scale, which goes from 1 (minor) to 5 (extreme).”

“A G2 storm can disrupt communication with spacecraft and require updates to satellite position calculations from increased drag.  At high latitudes, High-Frequency radio communication with aircraft can be impacted. South Africa is at 35 degrees latitude, so the forecast for local radio disruption and power systems impact is minimal.”

Although this solar flare is very far from being anything like an apocalyptic event, even the threat of minor storms – caused by these eruptions on the surface of the sun – is enough to pose a serious issue to some industries.

Indeed, SANSA has not ruled out that some parts of the planet could be impacted by ‘severe storm levels’. As the week goes on, we are expecting more updates from the agency, and any related disturbances will be reported here.

“An Earth-directed full halo CME was observed, associated with an M-class flare from AR2882 at 6:38 UTC on Saturday 9 October. Geomagnetic conditions are now expected to reach minor to severe storm levels.” | SANSA