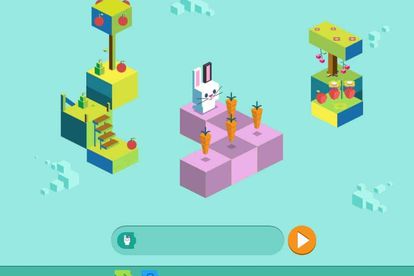 Without most of the world’s population in lockdown or isolation, keeping boredom at bay has been a challenge. Watching rocket launches and ISS footage can only go so far. What you need now is the most popular Google Doodle games.

Google said in a statement in April that Doodle game series will be looking back at some fan-favourite games. So far, we’ve not been disappointed by the offering.

I’ve personally lost more hours to Coding for Carrots than I care to admit, but let’s move on… Here are some of the most popular Google Doodle games, and a bit of history to give perspective. We will update this article weekly.

Coding for Carrots was first released in 2017 to celebrate the 50th anniversary of Logo, the first-ever programming language designed for use by children.

It introduces children to the world of Scratch programming, which the game is loosely based upon. Players advance by helping the bunny collect carrots by using coding techniques to connect blocks of computer code.

“With today’s Doodle – the first coding Doodle ever – we celebrate fifty years of coding languages for kids by “Coding for Carrots.” In the interactive Doodle, you program and help a furry friend across six levels in a quest to gather its favourite food by snapping together coding blocks.”

CrickHit was also released in 2017, to celebrate the same years ICC Champions Trophy which took place at the Oval. In this game, you play cricket, as a cricket.

It’s a relatively simple but be warned, you’re going to see hours of your life go down the bat. of the confusing English sport but it’s very addictive.

In addition, it was Google Doodle’s smallest interactive Doodle ever. The team made it mini on purpose so that everyone could enjoy the game; even those playing or slower mobile connections.

Fischinger was released in 2017 to celebrate the 117th birthday of Oskar Fischinger, the influential filmmaker and visual artist. The game lets you make music, and that already is a win in our books.

The game also lets you create music by moving your finger or mouse cursor over on-screen notes to create music on a virtual theremin.

Garden Gnomes was released back in in 2018 to celebrate Garden Day in Germany, as well as the European nations love of gnomes.

All you have to do is fling a Garden Gnome from a trebuchet and compete in gaining the high scores. What’s not to like!

What is a Google Doodle game?

First up, what is a Google Doodle game, you ask? Google describes it as a “temporary alteration of the logo on Google’s homepage to mark a special occasion.

Moreover, the first-ever Google Doodle was designed in 1998 by Larry Page and Sergey Brin. The doodle was created to honour The Burning Man event in Black Rock City, Nevada.

Since then, Google Doodles were created consistently – by a team of people called Doodlers – to mark historical events. By 2019, the team created more than 4 000 doodles.