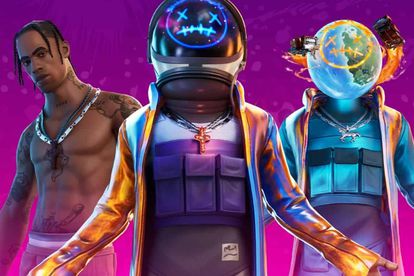 Rapper, singer, songwriter Travis Scott debuted the first Fortnite concert, and more than 12 million people watched it. If you missed the first show, you surely do not want to miss the next three instalments.

Look, let’s be real, Fortnite’s live events are usually pretty on point to begin with, but joining forces with Travis Scott just took event live streaming to the next level.

Travis Scott’s Fortnite concert: What you need to know

For those not in the know, Epic Games have been building Travis Scott’s concert stage for the last week, in-game. Users were able to see the stage take shape.

A black stage was assembled, featuring multiple gold, inflatable Travis Scott heads around it. The show began with a strange planet-like object zooming in before blowing up. Andrew Webster writes:

“During the opening song, a giant Scott stomped around the island, while players could run across the water to catch a glimpse. As the tracks changed, so did the visuals”.

The Astronomical concert lineup can be viewed below. If you’re still not sure about attending, perhaps you want to watch a glimpse of the first concert here.

With two shows already down, Scott is set to perform three more. The times are listed below, and you’ll be able to attend the shows even if you are not in the region listed.

If nothing else, just watch it to get a glimpse into a future where virtual events are commonplace and accessible to all. What do you have to lose?

How to watch Travis Scott perform in Fortnite

Simply log into the game half an hour before showtime and hang around the stage area. You’d want to head just north of Sweaty Sands, where you’ll find a large island.

Be ready to dash onto the stage the moment the show starts.

HONESTLY TODAY WAS ONE OF THE MOST INSPIRING DAYS. LOVE EVERY SINGLE ONE OF U GUYS. AND I KNOW TIMES ARE WEIRD FOR US. BUT FOR ONE MOMENT TO BE ABLE TO HAVE THE RAGERS TO RAGE WHERE EVER YOU ARE IS AMAZING. LOVE U GUYS WITH ALL MY BODY. !!!!! GANG ?

“An other-worldly experience like nothing you’ve ever seen is coming April 23-25. Fortnite and Travis Scott Present: Astronomical. A one of a kind musical journey featuring @trvisXX and the world premiere of a brand new track”.

How about Travis Scott loot?

Scott is also part of Fortnite’s Icon Series, which will enable gamers to purchase Travis Scott skins and other cosmetic items. But wait, there’s more.

In addition to the above, there will also be a set of Astronomical challenges; you’ll have until Sunday 25 April to complete the challenges. Rewards will include a new Travis Scott spray and emote.