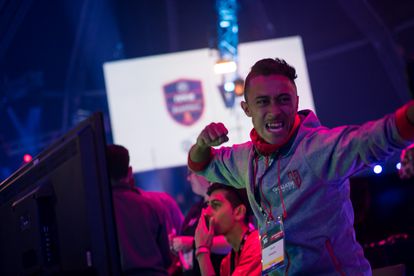 Julio Bianchi is living the dream of most young eSports fans and is well aware of just how fortunate he is to have reached the level he has.

Bianchi is a member of the Goliath Gaming stable and a professional eSports athlete, who says he is proof that it’s possible to transform a hobby into a career and make a name for yourself as an eSports athlete no matter where you’re from.

“I was just an average gamer playing at home and trying to qualify for the VS Gaming tournament on my own,” he says. “I was definitely not the best gamer at the time, but the difference is that I wanted it more than anyone else.”

Having initially pursued his love for football as a semi-pro player, he later decided to change career paths and pursue a football career of the virtual kind, and it wasn’t long before his talents were noticed.

“It’s thanks to Julio playing online and being connected that we were actually able to scout him,” says Goliath Gaming co-founder and Team Manager, Michele Brondani. “This is why it’s so important to get as many gamers in as many communities across the country connected to platforms, opportunities and other players through a reliable internet connectivity as we possibly can. There are so many hidden gems flying under the radar that you would never find if they weren’t competing online.”

Bianchi worked his way up, ranking second in South Africa on the official FIFA21 Global Series Leaderboard, and even earning a spot in the Forbes 30 under 30 Class of 2021. And, after putting up an incredible fight during the EA Sports FIFA 21 Global Series (#fgs21), Bianchi has qualified to play at the FIFAe World Cup (#FeWC) in London later this year, becoming the first South African and African to participate in the event.

“None of the people I would come across really knew about eSports, and no one in my life really thought I could achieve what I did, especially in my community – these things don’t happen where I’m from,” says Bianchi, adding that eSports changed his life and he’s happy he gets to showcase that to the rest of South Africa.

“A career in eSports can also be costly. I remember when I was playing as a free agent, my father had to sacrifice his last money to fly me down to Johannesburg to compete in the VS Gaming qualifier. Luckily, this is where I ended up being discovered by Goliath Gaming, so it worked out for me in the end,” says Bianchi.

According to Bianchi playing your heart out and making yourself ‘seen’ during online matches and live tournaments, is key in building a successful gaming profile and being recruited by a team. Bianchi says this is especially crucial for the many young players across the country who may not be able to afford to pay their own way.

“There are likely many more talented South African eSports players waiting on the side lines and hoping to make their break into the industry. They face a great number of challenges on this journey, not least of which are the global pandemic limiting their ability to attend events and get noticed,” says Taylor Kwong, Vuma CSI Manager. “Connectivity plays a major role, now more than ever, in boosting the opportunities for players living and gaming in the underserved communities of South Africa.”

Teaming up with Goliath Gaming, Vuma will be sponsoring Bianchi to attend an intensive week-long bootcamp, where he will have the chance to play alongside and compete against some of the top eSports athlete from around the world.

“It’s a privilege to be able to showcase and amplify a talented young athlete like Julio to get the best possible start ahead of the 2021 FIFAe World Cup. We see this as an opportunity to bring awareness and hype to eSports and all the possibilities that are offered to the youth through this industry. We want to ignite the ‘extraordinary’ in gamers across the country,” concludes Kwong.