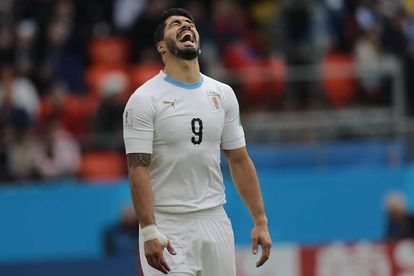 Uruguay supporters believe they have plenty of reason to be concerned ahead of Wednesday’s Group A clash against Saudi Arabia with key man Luis Suarez hopelessly out of form.

The Barcelona forward will celebrate his 100th appearance for his country at the Rostov Arena later today but fans have been left wondering when the celebrations will spill over to the field in front of goal.

Uruguay escaped with a narrow 1-0 defeat over Egypt last Friday thanks to Jose Giminez’s late header during a match in which Suarez missed a number of chances.

His inability to capitalise has left fans in a mild state of panic as Uruguay aim to reach the round of 16 for a third successive World Cup which will be a first. A win over Saudi Arabia who were thrashed 5-0 by hosts Russia, will do the trick.

As fans voiced their concern, there were, of course, those who couldn’t resist referring to Suarez’s less than desirable tendencies on the pitch, as seen below:

Luis Suarez is surely on the pitch somewhere pic.twitter.com/5OaaDzlPNF

They are, of course, referring to the 2014 World Cup when the controversial striker was banned for four months after tucking into Italy’s Giorgio Chiellini’s shoulder.

Fast forward to 2018 and nothing has changed say some fans who reckon the former Liverpool player showed quite an appetite for Egypt’s Ahmed Hegazi.

Luis Suarez usually grabs the headlines at the #WorldCup. His only contribution vs Egypt was grabbing Hegazi's balls. #EGYURU #bbcworldcup

Many have predicted that Wednesday’s game will be the most one-sided World Cup game in a while.

Let’s hope Suarez’s insatiable hunger is restricted to goals only.