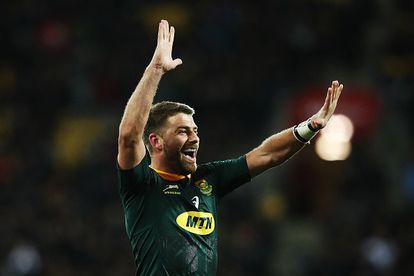 Springbok captain Siya Kolisi has alluded to something many outside the Bok setup may not know about fullback Willie le Roux – his love for the dancefloor.

The Wasps’ man has had some special attention focused on him when the men in green and gold walk out to Loftus for Saturday’s clash against the All Blacks, as he will be running out for his 50th Test cap.

Watch: Rugby: Springboks join fans for #Gwijo ahead of All Blacks clash

Speaking ahead of the match, his skipper revealed his special nickname for the 29-year-old, “Majaivane” – which loosely translates to “the one who’s always dancing”.

“We are very proud as a team for his achievement of reaching 50 caps‚” Kolisi said.

“What can one say about ‘Majaivane’ – he is one of the funniest guys in the team.

“He really works hard, and the one thing I admire about him is his passion for the game. Every time he scores a try‚ he runs away from the rest of us in wild celebrations and that shows that he is passionate.

“Whenever he gets the call-up‚ he gets so excited and phones us to tell us about it. He really deserves this moment because not too many guys have reached 50 caps for their countries.

“He is a team man, and he told us that it is not about him but the team on Saturday.”

Willie le Roux made his international debut back in 2013, and commanded a regular place in the Springbok back three – shifting to wing on occasion – before joining the Wasps in 2017.

The move to London saw him lose his place in the side, as he did not feature throughout the entire year before he was called back up to the squad ahead of the June internationals against England.