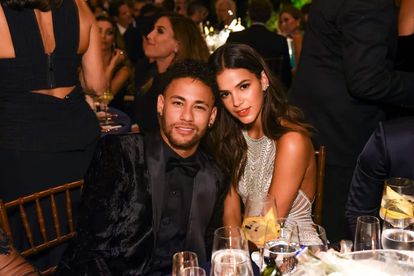 The love of her life is a bit under the weather right now but if there’s anyone that can get Brazil striker Neymar back to his best, it’s girlfriend Bruna Marquezine.

Brazil face Costa Rica in Friday’s Group E clash at the St Petersburg Stadium and are under massive pressure to avoid an early exit as suffered by Lionel Messi’s Argentina.

The five-time World Cup champions got off to an unconvincing start when they were held 1-1 by Switzerland in their opening fixture.

Neymar hobbled off the pitch last Sunday and two days later, limped out of a training session with a right sore ankle but it has been reported that the PSG star, sporting a new hairstyle, took part in Brazil’s final training session on Thursday.

It seems as if the 26-year-old really has a spring in his step as the world waits to see how he’ll perform in their second group match.

Marquezine’s arrival in Russia has obviously done him the world of good with the 22-year-old actress full of encouragement prior to boarding the flight to St Petersburg.

Remember what I told you: ‘Be strong and courageous! Do not be discouraged or fearful, for I, the Lord your God will be with you wherever you go!’”

Marquezine, who has 28.6 million followers on the photo-sharing platform, went on to say that Neymar must believe in himself so he can fulfill his calling.

She signed off by saying ‘I love you, my love’.

While Neymar and his team-mates prepare to take on Costa Rica who themselves are searching for their first victory in Russia, we thought it would be a good idea to get to know Bruna a little better.

Five fast facts you need to know about Bruna

She started acting as a child

Bruna started her acting career at the age of five. Her first role was in the soap opera Mulheres Apaixonasdas and has since starred in a number of movies including Women in Love, America and Snakes and Lizards.

She is currently portraying the role of Catarina de Lurton in the TV drama series Deus Salve o Rei who granted her time off so she could jet off to support her boyfriend.

She was on August 4, 1995 in Rio de Janeiro and has a younger sister named Luana.

The couple have broken up several times

Bruna and Neymar went their separate ways in 2014 but not before the dark-haired beauty, like now, offered her support as the home side suffered a humiliating 7-1 loss to Germany in the semifinals.

They got back together in 2017 only to break up again but the ship has since steadied as the heavyweights aim to add a sixth World Cup crown in Russia. The couple appeared in a steamy ad for fashion retailers C & A while Neymar was recovering from an ankle injury that kept him sidelined for four months.

Neymar reluctantly talked about their breakup at a 2017 charity event in Sao Paulo.

“I do not like to talk about personal things,” Neymar explained to The Sun.

“But yes, me and Bruna are separated. It’s a decision we have taken. It was a decision of both parties. Bruna is a girl I admire a lot and I hope she is happy, not only professionally but in her personal life. Life goes on, because this is a part of it. We end as good friends.”

Bruna would love to have twins one day

Bruna is very specific when it comes to motherhood. Not only does she want to be a mom, but would love twins.

“I will continue working, but I will with my husband and be a mother of twins. My biggest dream is to be a mother.”

According to the Daily Mail, Neymar had planned to propose to Bruna on his birthday in 2017 after buying a ring and rehearsing what he was going to say on their trip to Las Vegas. But things took a turn for the worst during a trip to South Africa as well as a friend persuading the soccer star to change his mind.

Bruna denied that Neymar had proposed

It was reported that Neymar had proposed to Bruna only to be turned down. But in an interview with a magazine, Bruna denied it and reinforced her desire to be a mother but at the right time.

The couple are known as ‘Brumar’ in Brazil

It’s only natural that as one of the most recognisable couples in Brazil there will be a nickname doing the rounds. Things appear to be stable with some believing that the previous breakup had to do with long-term commitment.

For now, Neymar is hellbent on getting Brazil out of jail but it certainly helps to have his sweetheart around as the tournament enters its second week.